Zumba to manicure to massage: Jaycees treat Marawi fighters like a king for one day 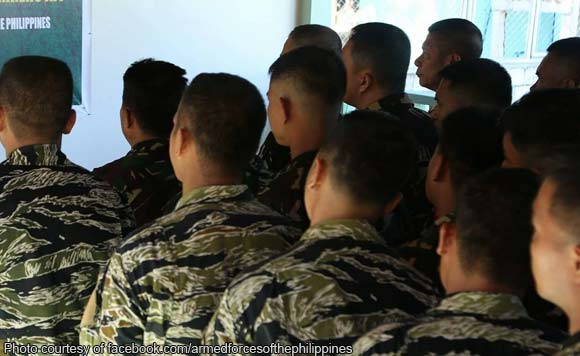 A group of young people treated members of the Special Operations Command (SOCOM) here for a day of wellness on Saturday.

Initiated by the Junior Chamber International-Golden Grains Chapter (JCI-GG) in Cabanatuan City, the gesture was to thank the soldiers for their sacrifices in liberating Marawi after a five-month siege by Islamic extremists.

“They got so much stress in Marawi it is about time we pampered them as a way to thank them,” JCI-GG president Ervine Carla Abesamis said.

The wellness day for the soldiers began with a fun-filled Zumba session at the SOCOM Special Forces School here.

Abesamis said the soldiers who had joined the government security forces in the153-day Marawi crisis were also given free manicure and massage therapy by wellness professionals.

The activity was done in cooperation with the provincial government of Nueva Ecija, particularly the Provincial Manpower Training Center and the Office of the Governor.

A Dagupan City-based fraternity also joined the activity, which also featured the military band performing love and patriotic selections as they shared food in a boodle fight.

Goods, including sacks of rice, were likewise raffled off for the soldiers.

It was the first time the JCI Cabanatuan City ventured into this kind of service, according to Abesamis.

“It was touching to mingle with people whom you know dedicatedly fight for your safety, for the freedom of your beloved country,” she said.

Capt. Regidor Duldulao, who led a team of over 70 soldiers, said such treatment from the JCI speeds up the wounded soldiers’ recovery.

Duldulao, himself, was hit by shrapnel from a Maute-planted bomb. He said the gratefulness being expressed by some people affirms the soldiers’ feeling that they did the right thing in Marawi.

“Thank you. This is a big help that boosts the morale of our soldiers because the troops have some bad experiences in Marawi. With this kind of activities, we are reminded that what we did was for the sake of our nation,” he said. (PNA)

Politiko would love to hear your views on this...
Post Views: 0
Spread the love
Tags: Cabanatuan City, Junior Chamber International-Golden Grains Chapter, Marawi, Office of the Governor, Provincial Manpower Training Center, SOCOM Special Forces School, Special Operations Command
Disclaimer:
The comments posted on this site do not necessarily represent or reflect the views of management and owner of POLITICS.com.ph. We reserve the right to exclude comments that we deem to be inconsistent with our editorial standards.