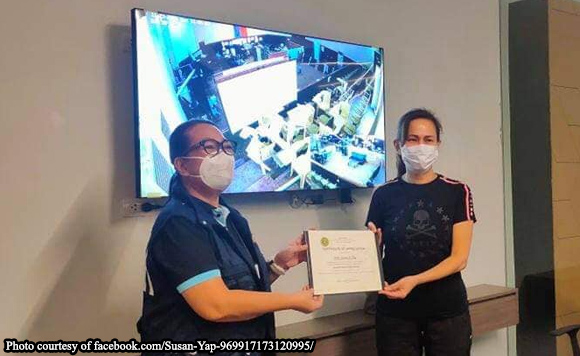 Tarlac Governor Susan Yap on Tuesday expressed her anger at the “faulty” reporting by GMA News of the Department of Health (DOH)’s tally of positive coronavirus cases in Tarlac province.

“The GMA news angered and riled me and caused panic in Tarlac,” the governor said in a Facebook post.

“Called in the entire crew as to how such a faulty reporting was done. DOH needs explaining to do!” Yap said. She did not say what she said or did to the TV crew.

She was referring to a GMA report citing inaccurate data released by the DOH that there were 211 new Covid-19 cases in Tarlac as of November 21.

In a November 22 advisory, the Tarlac government clarified that the previous DOH report was “incorrect.”

“The reported 211 positive cases by the Central Office of the DOH in the province yesterday [November 21] was incorrect,” officials said.

“There were only 19 officially reported cases in the province and the DOH central office is now in the process of correcting their post which caused unnecessary panic and inconvenience to Tarlaqueños,” the advisory said.

“Rest assured that the Provincial Government of Tarlac through the Provincial Information Office reports only what is official and do not withhold any information regarding this deadly pandemic,” it added.

Politiko would love to hear your views on this...
Post Views: 12
Spread the love
Tags: coronavirus cases, Department of Health, GMA News, Susan Yap, Tarlac
Disclaimer:
The comments posted on this site do not necessarily represent or reflect the views of management and owner of POLITICS.com.ph. We reserve the right to exclude comments that we deem to be inconsistent with our editorial standards.