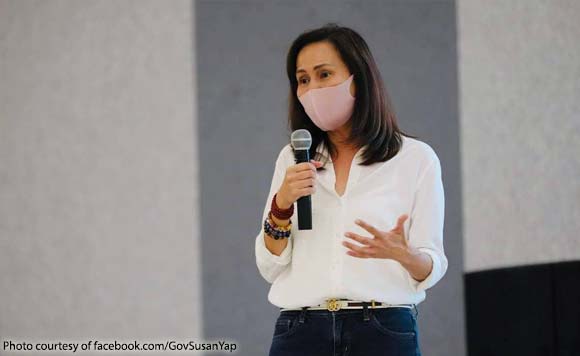 Tarlac Governor Susan Yap on Friday said the opening of the first 18 kilometers of the Central Luzon Link Expressway (CLLEX) Project connecting Nueva Ecija and Tarlac provinces brought her closer to her dream of “east-west connectivity.”

“This reminds me of my long-time dream to link the east and the west. I’ve always thought most roads ran from the north to the south,” she said on her Facebook page.

“What we lack is the east-west connectivity – from the West Philippine Sea to the Pacific Ocean,” Yap said.

“We’ve pushed for this link to jumpstart this connectivity, and it begins with Provincial Government of Tarlac being in the region’s center. Apart from my dream, Secretary (Mark) Villar and I both agree that this would be a great economic driver here for Tarlac,” she said.

The first 18-kilometer section of the P11.8 billion CLLEX, the country’s first toll-free expressway, was inaugurated on Thursday by the Department of Public Works and Highway.

The project was implemented by DPWH UPMO-Roads Management Cluster 1 with funding assistance from the Japan International Cooperation Agency (Jica) under the Build, Build, Build program.

Politiko would love to hear your views on this...
Spread the love
Tags: Nueva Ecija, Susan Yap, Tarlac
Disclaimer:
The comments posted on this site do not necessarily represent or reflect the views of management and owner of POLITICS.com.ph. We reserve the right to exclude comments that we deem to be inconsistent with our editorial standards.