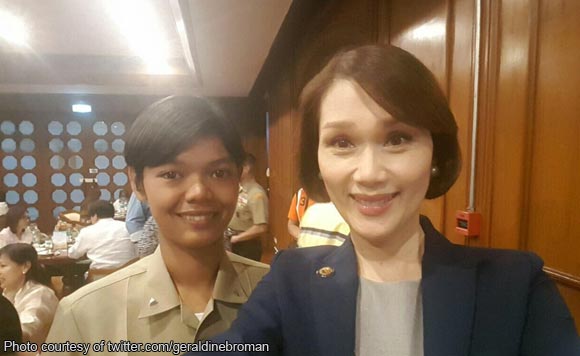 Bataan 1st District Representative Geraldine Roman may have just found the woman as tough – or even tougher – than her.

The politiko took a selfie with Cadet 1st Class Rovi Mairel Valino Martinez, the valedictorian of the Philippine Military Academy’s Batch 2017, when the latter visited the House of Representatives.

Who run the world?

With the Valedictorian of this year's PMA graduating class. #RunTheWorldGirls pic.twitter.com/LVp93Plhje

Politiko would love to hear your views on this...
Post Views: 0
Spread the love
Tags: Bataan 1st District Representative, Geraldine Roman, House of Representatives, Philippine Military Academy, politiko, Rovi Mairel Valino Martinez
Disclaimer:
The comments posted on this site do not necessarily represent or reflect the views of management and owner of POLITICS.com.ph. We reserve the right to exclude comments that we deem to be inconsistent with our editorial standards.