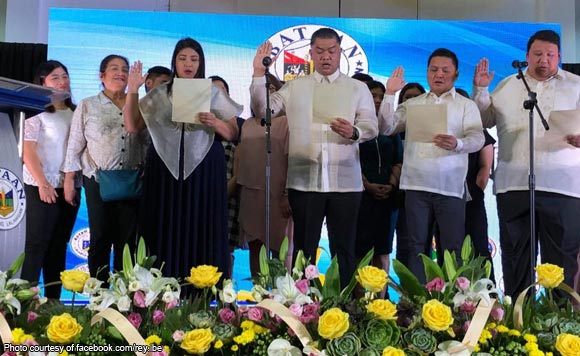 Municipal, provincial and congressional officials in this province who were elected in the May 13 mid-term polls on Thursday took their oath here in preparation for their assumption of office on July 1st.

Sworn into office were 98 members of the Sangguniang Bayan and Sangguniang Panglungsod, 12 mayors and 12 vice-mayors in 11 towns and a city in rites held at the Grand Ballroom of Lou-Is Restaurant.

“Tapos na ang eleksyon, tayong lahat ay taga Bataan kaya naman sigurado akong uunahin natin kung ano ang nararapat at dapat para sa ating bayan, para sa ating lalawigan (The election is over. We are all from Bataan, that is why I am sure that we will prioritize what is appropriate and must be done for our town and for our province),” Rep. Garcia said.

Governor Garcia said he was happy that although the elected officials
belong to different parties and of different belief, they showed unity
during the oath-taking.

“Napakagandang pangitain ito at napakagandang larawan para sa ating mga kababayan. Huwag po nating sayangin ito (This is a wonderful vision and a beautiful picture for our people. Let us not waste it),” the governor said.

Only Rep. Geraldine Roman was not able to attend the oath-taking as she is in Spain. (PNA)

Politiko would love to hear your views on this...
Spread the love
Tags: Antonio Raymundo, Cynthia Estanislao, Efren Pascual Jr, Jocelyn Castaneda, Liberato Santiago Jr, Ramil del Rosario, Sangguniang Bayan, Sangguniang Panglungsod
Disclaimer:
The comments posted on this site do not necessarily represent or reflect the views of management and owner of POLITICS.com.ph. We reserve the right to exclude comments that we deem to be inconsistent with our editorial standards.