Win some, lose some for Bataan Rep. Geraldine Roman 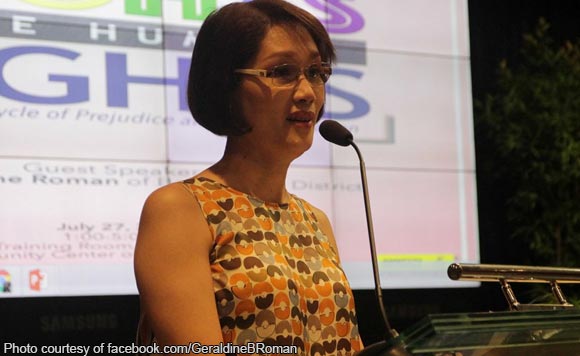 There are two sides of a coin for Bataan Representative Geraldine Roman.

In a statement, Bataan Representative Geraldine Roman said that she neither voted for nor against the Marcoleta motion because she was in her hometown and was not able to cast her vote.

“To put all speculations to rest, let me make it clear that I was not at the House of Representatives last September 12 to cast my vote,” Roman said. “Not being there, it was impossible for me to have cast my vote. Had I been present, I would have upheld the importance of such a crucial government agency like the CHR.”

A day after the House vote on the CHR budget, House Bill 4982, which prohibits and penalizes discrimination based on sexual orientation and gender identity or expression (Sogie), was passed on second reading during the plenary session

Roman, the Philippines’ first transgender congresswoman, said in a statement that the development marks a milestone for equality.

She said the bill is a landmark legislation meant to criminalize discriminatory practices against the lesbian, gay, bisexual and transgender (LGBT) community.

Last March, the politician has been criticized for her controversial “yes” vote to approve the death penalty bill on final reading.

She explained then that she had to “bend to the views of her constituents in Bataan who favored the restoration of death penalty.”

Politiko would love to hear your views on this...
Post Views: 0
Spread the love
Tags: Akbayan party-list, Bataan, bisexual, Commission on Human Rights, DIWA, gay, House of Representatives, lesbian, Marcoleta, Rep. Emmi Aglipay-Villar, Representative Tom Villarin, Sol Aragones, transgender
Disclaimer:
The comments posted on this site do not necessarily represent or reflect the views of management and owner of POLITICS.com.ph. We reserve the right to exclude comments that we deem to be inconsistent with our editorial standards.