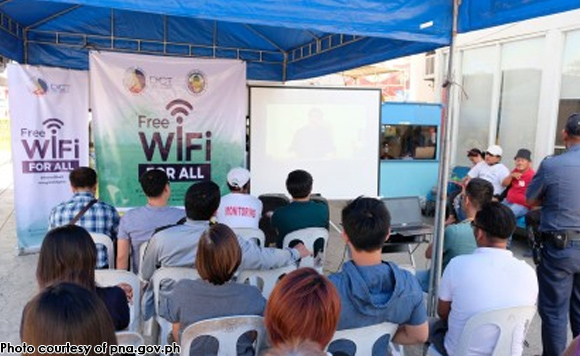 MABALACAT CITY, Pampanga — Residents in this city can now access the Internet through the Department of Information and Communications Technology’s (DICT) “Free Wi-Fi for All” program, which was launched at the Dau Bus Terminal here Tuesday.

The Free Wi-Fi for All was simultaneously launched in selected public places nationwide. The program is in line with the 100-day assumption of Secretary Gregorio B. Honasan II as head of the DICT.

Of the 15 Wi-Fi sites, one was already operational as of Tuesday. Next in line are the Mabalacat City College, Resettlement Parks, and the City Hall.

The DICT has partnered with the Mabalacat City government for the rollout of free Wi-Fi Internet services in the city. DICT 3 (Central Luzon) Director, engineer Reynaldo T. Sy, thanked City Mayor Crisostomo Garbo and the local government for their unwavering support and cooperation in the project.

“The main objective of this project is to connect people,” Sy said.

The national government has earmarked P1.3 billion for the DICT’s free Wi-Fi project, which aims to put up 100,000 sites all over the country by 2022. (PNA)

Politiko would love to hear your views on this...
Spread the love
Tags: Department of Information and Communications Technology, Mabalacat City, Pampanga, Wi-Fi for free
Disclaimer:
The comments posted on this site do not necessarily represent or reflect the views of management and owner of POLITICS.com.ph. We reserve the right to exclude comments that we deem to be inconsistent with our editorial standards.