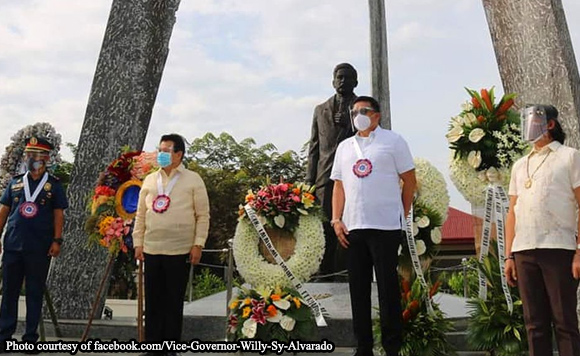 Unlike the previous years, the occasion was only marked with a wreath-laying ceremony in front of Dambanang Marcelo H. Del Pilar in Sitio Cupang, Barangay San Nicolas here amid the coronavirus disease 2019 (Covid-19) pandemic.

The activity was led by Vice Governor Wilhelmino Sy-Alvarado, Mayor Vergel Meneses and other local officials and members of the Bulacan Press Club.

Meneses called on the public, especially the youth, to always remember “the patriotism, bravery and intelligence as exemplified by his (Del Pilar) works as a lawyer, as a revolutionary and as a propagandist.”

Del Pilar was a key figure in the struggle against Spanish occupation, and one of the leaders of the Philippine propaganda movement.

He became the editor-in-chief of La Solidaridad, the newspaper of Filipino propagandists who pushed for the Philippines to become a province of Spain and afford the citizens the same rights with those in the mainland.

She said the flowers made from newspaper pages symbolize Del Pilar as a journalist.

Politiko would love to hear your views on this...
Spread the love
Tags: 170th birthday anniversary, Bulacan, Bulakan, Marcelo H. del Pilar, Spanish occupation
Disclaimer:
The comments posted on this site do not necessarily represent or reflect the views of management and owner of POLITICS.com.ph. We reserve the right to exclude comments that we deem to be inconsistent with our editorial standards.