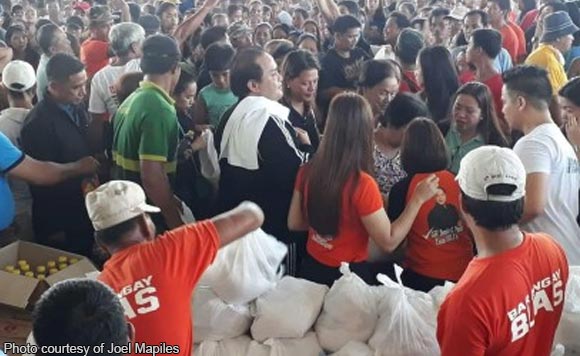 CANDABA, Pampanga – The provincial government of Pampanga on Friday distributed some 7,000 food packs to residents of 11 villages here who were affected by Typhoon Ompong.

Vice Governor Dennis Pineda personally led the distribution to the thousands of families victimized by widespread flooding, held at the Miss Earth Park covered court in Barangay Pasig, this town.

The Sangguniang Bayan, with the approval of the mayor, passed Resolution No. 60 last Monday declaring the municipality of Candaba under state of calamity.

“This town (Candaba) was not spared from the wrath of Typhoon Ompong, which caused the swelling and overflowing of the Pampanga River and the Candaba Swamp, inundating majority of the 33 barangays,” the resolution stated.

The widespread flooding affected 70 percent of the population. The main roads — Candaba Baliwag Road and Pasig Cut-Off Channel going to and from Candaba — were rendered impassable to small and light vehicles.

“The farmers and fishpond owners bore the brunt of the damage as the ready-to-harvest crops and tilapia were either lost or destroyed,” the resolution also stated.

Based on the records submitted to the Provincial Disaster Risk Reduction and Management Office as of Sept. 20, Candaba had 6,134 affected families or about 27,897 individuals from the 10 flooded barangays of Dulong Ilog, Pasig, San Agustin, Lanang, Mandasig, Pansinao, Pescadores, Mandili, Paralaya, and Tagulod.

This town also suffered damages in agriculture, particularly on rice crops, amounting to some P97.15 million.

The municipal government also maintains the Municipal Action Center as an evacuation center with 14 families or 57 individuals in the villages of Pasig and San Agustin.

Classes were still suspended in all levels in Barangays Pansinao, Sto. Rosario, Gulap, Lanang, Paralaya, Pasig, Buas, Pescadores, San Agustin, Mandasig, and Bambang, as the schools in these areas were still submerged in two to three feet of floodwater. (PNA)

Politiko would love to hear your views on this...
Spread the love
Tags: 'Ompong' victims, Candaba, Dennis Pineda, food packs, Pampanga, Typhoon Ompong
Disclaimer:
The comments posted on this site do not necessarily represent or reflect the views of management and owner of POLITICS.com.ph. We reserve the right to exclude comments that we deem to be inconsistent with our editorial standards.