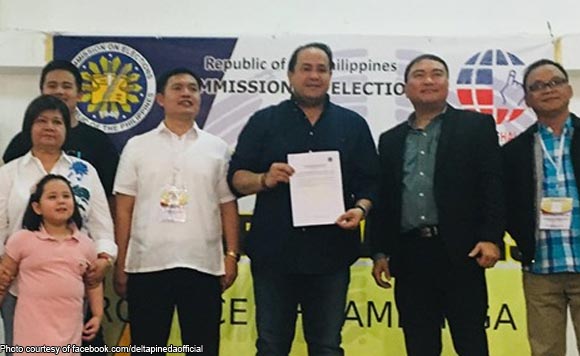 He garnered 657,606 votes against the 229,392 votes of incumbent Bacolor town mayor Jomar Hizon to become the 14th governor of Pampanga since 1946.

After his proclamation, Pineda thanked the electorate for helping him succeed his mother, now Vice Governor-elect Lilia Pineda.

“I commit to be a dedicated governor. I will be a doer and I will maintain to be a good listener at the same time. I value the inputs of the people and my co-public servants. Like my good mother, myadministration shall continue to be for the people, especially for lifting the poor out of poverty and expanding the middle class,” he said.

Pineda also committed to abide by the principle of good governance by leading the 2,000 men and women of the provincial government to efficiently implement programs and by generating the participation of citizens in the process.

He assured that crime prevention is a top priority so that programs are not derailed by illegal drugs proliferation, criminal activities, insurgency and terrorism.

“Sa ating mga kabataan, ilalayo ko kayo sa droga sa pamamagitan ng suporta sa edukasyon at training. Ang sports development program ay ating pag-iigihin para mas dumami at gumaling pa ang atletang Kapampangan, (To our youth, I will drive you away from drugs through my support to education and training. We will intensify the sports development program so that there will be more good Kapampangan athletes),” Pineda said.

The incoming governor likewise vowed to strengthen political unity that will redound to the best interest of the people of Pampanga and its economy.

“The Pampanga Megalopolis shall be our blueprint in pole vaulting our dear province to new heights,” he added. (PNA)

Politiko would love to hear your views on this...
Spread the love
Tags: Bacolor, Dennis "Delta" Garcia Pineda, Jomar Hizon, Lilia Pineda, Pampanga
Disclaimer:
The comments posted on this site do not necessarily represent or reflect the views of management and owner of POLITICS.com.ph. We reserve the right to exclude comments that we deem to be inconsistent with our editorial standards.