US envoy lauds construction of 1st facility under Edca in Pampanga 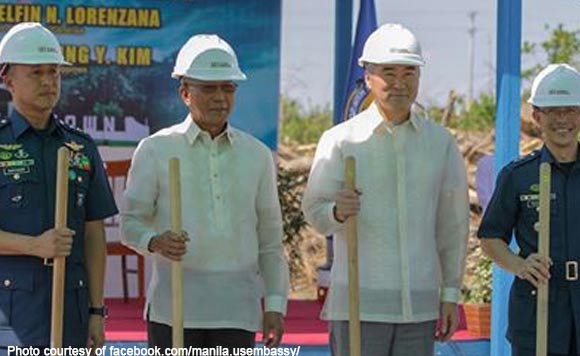 United States Ambassador to Manila Sung Kim underscored the importance of building a facility inside a military base in Pampanga, particularly in responding to calamities in the region.

Kim and Defense Secretary Delfin Lorenzana led on Tuesday, April 17, the groundbreaking ceremony for the construction of US military warehouse in Basa Air Base in Floridablanca town under the Enhanced Defense Cooperation Agreement (Edca) between the two countries.

“Honored to take part in a groundbreaking ceremony of the first major EDCA project at Basa Air Base with Secretary Lorenzana. This new warehouse will be vital in responding together to natural disasters in the region,” he said on his Twitter.

Edca was signed in April 2014 during the tense territorial dispute between the Philippines and China in West Philippine Sea.

The agreement allows for the construction of American military structures in the Philippines as well as storage of weapons, supplies, transportation and personnel for a period of 10 years. #

Politiko would love to hear your views on this...
Spread the love
Tags: American military, Basa Air Base, China, Defense Secretary Delfin Lorenzana, Enhanced Defense Cooperation Agreement (Edca), Floridablanca, Pampanga, Philippines, United States Ambassador to Manila Sung Kim, US military, West Philippine Sea
Disclaimer:
The comments posted on this site do not necessarily represent or reflect the views of management and owner of POLITICS.com.ph. We reserve the right to exclude comments that we deem to be inconsistent with our editorial standards.