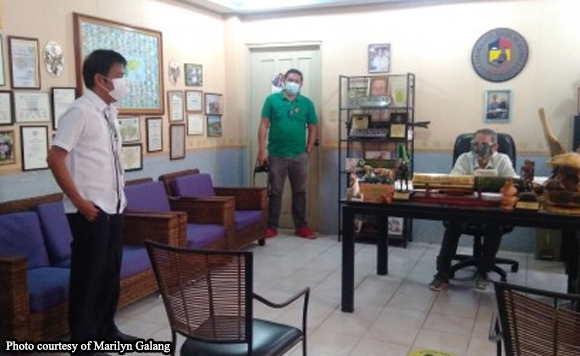 GUIMBA, Nueva Ecija – Irrigation and local chief executives (LCEs) in some northern municipalities of the province on Tuesday vowed to work together in uplifting the plight of the agriculture sector through coordinated services.

The interim division caters to portions of the town as part of its service area.

Sharing Dizon’s aspiration, Domingo said his office has its line always open for anything that the LGU would raise for the farmers’ welfare.

In Talugtug town, Mayor Pacifico Monta said the irrigation system paved the way for the productive utilization of several areas which used to be grassy.

“Pero meron pa ring ilang kailangan (But, there is still some needs)” he said.

Domingo, who also visited the offices of Mayor Victor Badar of Nampicuan and Mayor Flor Paguio-Esteban of Cuyapo, underscored the importance of close coordination between the LCEs in ensuring the successful implementation of their programs, particularly in providing irrigation services to local farmers.

“We really have to get the support and cooperation of LCEs, as well as farmers,” Domingo said.

The NIA plays a vital role in the government’s campaign for rice sufficiency, the officials noted.

Politiko would love to hear your views on this...
Spread the love
Tags: Guimba, Irrigation and local chief executives, Jose Ariel Domingo, Nueva Ecija, Sharing Dizon
Disclaimer:
The comments posted on this site do not necessarily represent or reflect the views of management and owner of POLITICS.com.ph. We reserve the right to exclude comments that we deem to be inconsistent with our editorial standards.