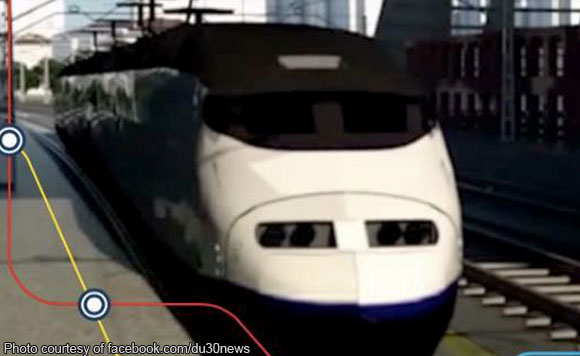 Tugade said that officials from the local governments of Marilao and Meycauayan in Bulacan and Valenzuela, Caloocan, and Manila were present on Monday to show their appreciation for the “much-anticipated” and “long-overdue” construction of the rail line, which took more than 12 years and three administrations for the construction of the 106-km elevated Manila-Clark railway.

“[We are] gathered here not to celebrate but to make a pact that as we want to finish this project, you all are here to give us the needed support so that we finish this project. We have been waiting for this project for more than 12 years,” Tugade said, who led the station markings in all five locations.

Despite differing political parties, LGU leaders are unanimous in their approval on the necessity of constructing the rail line, citing the development it will potentially spur.

Composed of 17 stations connecting Manila to Central Luzon, the 106-km elevated Manila-Clark railway project is expected to accommodate around 350,000 passengers on its opening year, and shall commence on the last quarter of 2017 through Official Development Assistance (ODA) funding from Japan.

The construction of the first phase covering the end-point station of Tutuban in Manila going to Malolos in Bulacan is estimated to cost around PHP105-billion, while the remaining stations included in the second phase linking Malolos to the New Clark City in Tarlac would cost around PHP211-billion, with a total project cost of PHP316-billion.

During the station marking event, Japanese Ambassador Kazuhide Ishikawa gave the assurance in behalf of the Japanese government that they would continue to provide the necessary assistance to the Philippine government for the completion of the project.

Aside from the Manila-Clark railway project, Japan will likewise fund the Manila-Los Baños segment as part of the North-South Commuter Railway Project. China, on the other hand, is keen to fund the PHP151-billion, 581-km railway (known as the PNR South Long Haul) that will connect Matnog in Sorsogon, and Batangas to the National Capital Region. (Christopher Lloyd T. Caliwan/PNA)

Politiko would love to hear your views on this...
Post Views: 2
Spread the love
Tags: Bases Conversion and Development Authority, Batangas, Bulacan, Caloocan, Department of Public Works and Highways, Department of Transportation, governments of Marilao, Japan, Malolos, Manila, Manila-Clark railway, Metropolitan Manila Development Authority, Meycauayan, National Capital Region, National Economic Development Authority, Official Development Assistance, president Rodrigo Duterte, Secretary Arthur Tugade, Valenzuela
Disclaimer:
The comments posted on this site do not necessarily represent or reflect the views of management and owner of POLITICS.com.ph. We reserve the right to exclude comments that we deem to be inconsistent with our editorial standards.