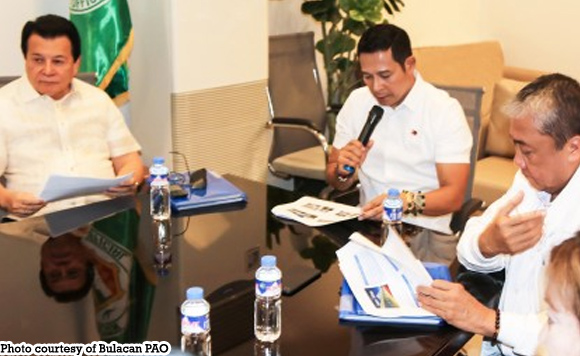 CITY OF MALOLOS, Bulacan—Department of Transportation (DOTr) Secretary Arthur Tugade has assured local officials here of the full implementation of the government’s ongoing infrastructure projects in this province.

Tugade made the assurance as he met provincial leaders headed by Governor Daniel Fernando and Vice Governor Wilhelmino Sy-Alvarado here on Wednesday in an effort to enhance cooperation in the implementation of the projects in Bulacan.

He particularly cited the two railway projects — the Philippine National Railways (PNR) Clark Phases 1 and 2, both under the 147-kilometer North-South Commuter Railway (NSCR) and traversing through Bulacan.

In fact, he said the construction of the PNR Clark Phase I from Tutuban to Malolos City is two to three months ahead of its construction schedule.

He also said that 24/7 construction works have been implemented since July in order to achieve partial operability by the fourth quarter of 2021.

Once PNR Clark Phase 1 is completed and fully operational by 2021, it is expected to serve 300,000 passengers daily, with travel time between Tutuban and Malolos significantly reduced from two hours to just 35 minutes.

Tugade, meanwhile, said that bidding for PNR Clark Phase 2, running from Malolos to Clark, has received worldwide attention, following the recent opening of bids that were participated in by nine international and two local companies.

The official also requested for assistance from the local government units (LGUs) on the processing of building permits, permits of affected utility providers, and permit to enter, which the local chief executives vowed to issue.

The local officials, for their part, raised concerns and clarifications on certain issues such as the provision of accessibility for senior citizens and persons with disabilities (PWDs) in train stations, proper relocation of affected families, desired designs per train station based on the history of each municipality, provision of an easier access to the airport, and reduction of road congestion.

Governor Fernando suggested building an underpass instead of a footbridge, which he said is more accessible for senior citizens and PWDs.

Calumpit town Mayor Jessie De Jesus, on the other hand, raised his concern on the relocation of his constituents who will be affected by the construction of a station in his town.

“We have already met with the National Housing Authority. There are identified areas where they will be transferred and that is a component of social commitment,” Tugade said.

Fernando thanked Secretary Tugade and the other DOTr officials for ensuring constant coordination with local officials and other stakeholders to expeditiously realize various transport infrastructure projects in the province.

Politiko would love to hear your views on this...
Spread the love
Tags: Bulacan, Department of Transportation (DOTr), Governor Daniel Fernando, Secretary Arthur Tugade, Vice Governor Wilhelmino Sy-Alvarado
Disclaimer:
The comments posted on this site do not necessarily represent or reflect the views of management and owner of POLITICS.com.ph. We reserve the right to exclude comments that we deem to be inconsistent with our editorial standards.