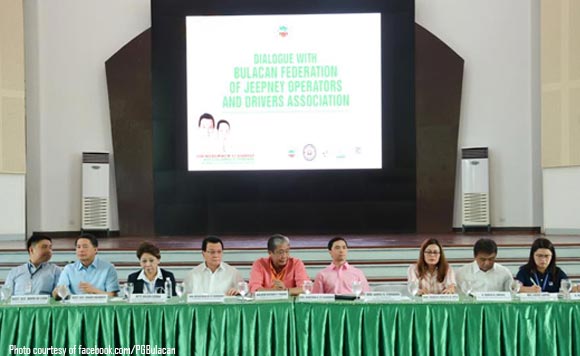 In an assembly held at The Pavilion Hiyas ng Bulacan Convention Center in the city of Malolos, Tugade told the Federation of Jeepney Operators and Drivers Association of Bulacan that it is high time to change the transportation system of the country, as it has gone from “bad to worse”.

He asked the drivers and operators to familiarize themselves with the modernization program, which commenced last month, so that the government can meet them halfway.

Officials and members of the federation in Bulacan expressed their sentiments that the program could affect their livelihood.

On the contrary, Tugade said the program does not aim to remove their livelihood from them, but to help improve and professionalize the transportation system.

During the meeting, Alvarado said that the government is also offering loan assistance to those who are willing to acquire new vehicles approved under the modernization program.

According to the governor, micro, small and medium entrepreneurs like the jeepney drivers and operators can maximize the benefits in getting their loans, in order to help them source their capital to procure a compliant vehicle.

Politiko would love to hear your views on this...
Post Views: 1
Spread the love
Tags: Bulacan Gov. Wilhelmino Sy-Alvarado, Duterte administration, Federation of Jeepney Operators and Drivers Association of Bulacan, he Pavilion Hiyas ng Bulacan Convention Center, jeepney operators, livelihood, Malolos, modernization program., PUV (Public Utility Vehicles), Transportation Secretary Arthur Tugade
Disclaimer:
The comments posted on this site do not necessarily represent or reflect the views of management and owner of POLITICS.com.ph. We reserve the right to exclude comments that we deem to be inconsistent with our editorial standards.