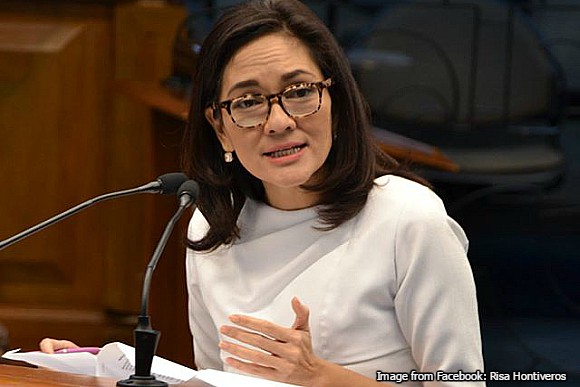 Senator Risa Hontiveros has backed Senator Panfilo Lacson’s observation that the modus of implicating well-off Filipinos and foreigners in illegal drugs in exchange for money is nothing new.

“I join the observation of Sen Lacson and other sectors such as the Filipino-Chinese and Korean communities that tokhang for ransom is not an isolated incident,” Hontiveros said in a statement.

The apparent trend of “tokhang for ransom” was brought to life after Lacson showed a video during the Senate hearing on the killing of Korean businessman Jee Ick Joo Thursday (Jan. 26) showing what appeared to be law enforcement agents planting packets purportedly containing drugs during a raid at a company.

Jee was also reported to have been abducted by men claiming to be carrying a legitimate anti-drug operation. He was later killed in a car parked inside the Philippine National Police headquarters in Camp Crame.

Hontiveros said the government’s violent rhetoric not only resonated well with rotten cops, it also created a new layer of bad eggs in the PNP that uses human rights-deficient war on drugs to commit heinous crimes.

“I fully agree that the government must fight the proliferation of illegal drugs. But it must do it legally and not at the expense of human rights,” she said.

Politiko would love to hear your views on this...
Post Views: 0
Spread the love
Tags: Camp Crame, Jee Ick Joo, Panfilo Lacson, Senator Risa Hontiveros, Tokhang for ransom
Disclaimer:
The comments posted on this site do not necessarily represent or reflect the views of management and owner of POLITICS.com.ph. We reserve the right to exclude comments that we deem to be inconsistent with our editorial standards.