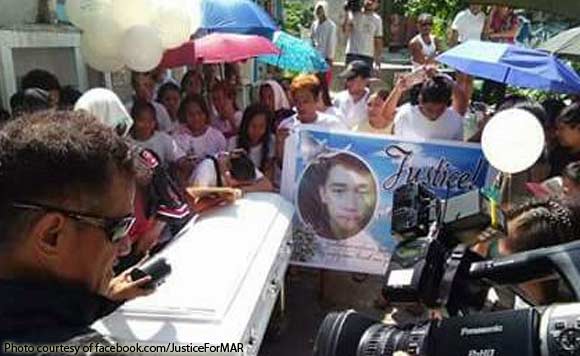 One of the suspects to the killing of the 16-year-old boy whose decomposing body was recovered by scavengers in a stream in San Jose del Monte City, Bulacan on Sept. 13, turned himself in and confessed to killing the minor.

Police identified the suspect as Alexander Senogat, 21. He is currently under police custody.

According to the victim’s mother, Genevie, he was last seen alive when he left their house in Barangay 176, Caloocan City on the night of Aug. 25. He told his mother he would drive a tricycle to earn some money.

Senogat said that on Aug. 27, he was drinking with four other friends when the victim, Michael Angelo Remecio, passed by them and was seemingly drunk.

He said that Remecio threw a bottle of beer at the group, who then got angry and killed him by stabbing him thrice.

Senogat said he and four others placed Remecio’s body in a sack then threw it in the river.

On Sunday, during Remecio’s burial, Public Attorney’s Office (PAO) chief Persida Acosta said the parents of Remecio want the National Bureau of Investigation to also look into the murder of their son because of distrust of the police.

According to Acosta, she has already asked Justice Secretary Vitaliano Aguirre II to issue a department order directing the NBI to conduct its own probe of the boy’s death.

“The Remecio family is crying for justice and they trust the NBI better than the police in investigating and resolving [their son’s death],” Acosta was quoted as saying in news reports.