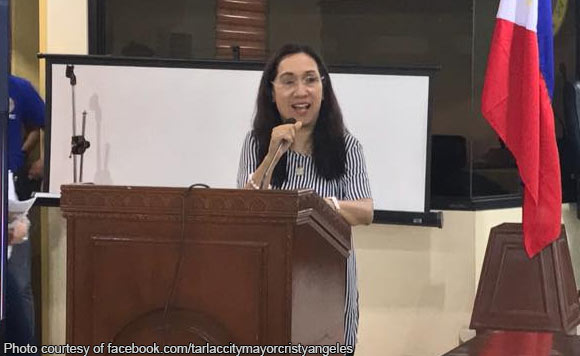 In partnership with the Department of Science and Technology (DOST) in Tarlac, residents who are skillful in weaving receive further training and learn water hyacinth drying, stalk preparation, dyeing technique and leatherized sheet-making.

Water lily has been considered a menace in small bodies of water in Tarlac but now it has become an abundant source of income for Tarlaqueños.

Angeles’ project has been gaining popularity since it was launched last year.

This week, the DOST and the Special Livelihood Projects Management Office awarded certificates of completion to the participants of the two-day seminar on water hyacinth processing and finishing.

The water lily project has also been recognized by the DOST as the local government’s effort to provide an alternative source of income for umemployed residents of the city.

Politiko would love to hear your views on this...
Post Views: 0
Spread the love
Tags: Department of Science and Technology, Mayor Cristy Angeles, Special Livelihood Projects Management Office
Disclaimer:
The comments posted on this site do not necessarily represent or reflect the views of management and owner of POLITICS.com.ph. We reserve the right to exclude comments that we deem to be inconsistent with our editorial standards.