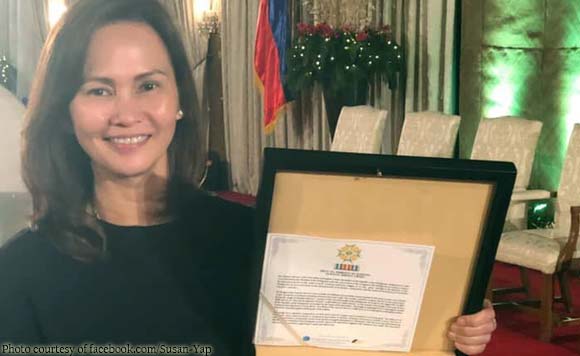 On her Facebook page, Yap said she was able to witness the event, courtesy of resigned Special Assistant to the President Christopher
“Bong” Go, who gave her a ride to Malacanang Palace where the ceremony was held.

“This is the highest award given to a civilian. She is the 6th recipient and only female awardee since the 1950s,” Yap said.

The lady politiko shared photos of her, holding the award that Undersecretary Narciso Santiago, Jr., currently the Presidential
Adviser for Revenue Enhancement and the husband of the late feisty senator, accepted from President Rodrigo Duterte.

Once dubbed as the “Iron Lady of Asia” for her no-nonsense drive against graft and corruption, Santiago passed away in September 2016, at the age of 71, after a bout with lung cancer.(END)

Politiko would love to hear your views on this...
Spread the love
Tags: late Senator Miriam Defensor-Santiago, Malacanang, president Rodrigo Duterte, Tarlac Governor Susan Yap, Undersecretary Narciso Santiago Jr.
Disclaimer:
The comments posted on this site do not necessarily represent or reflect the views of management and owner of POLITICS.com.ph. We reserve the right to exclude comments that we deem to be inconsistent with our editorial standards.