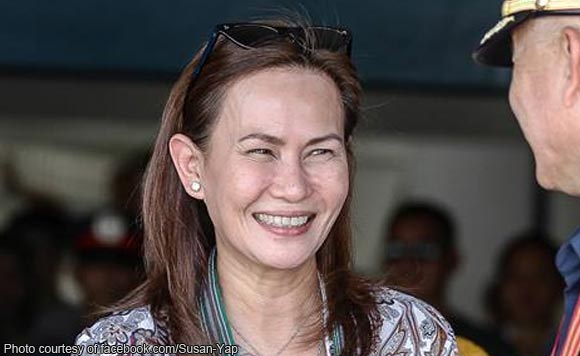 Tarlac Governor Susan Yap attended Monday a meeting initiated by the Department of Agriculture to assess the impacts of typhoon Ompong and craft a rehabilitation plan for the affected regions.

On her Facebook page, Yap posted photos of her in attendance at what she calls as “special meeting” with Agriculture Secretary Manny Pinol and other department officials and governors from Regions 1, 2 and 3.

Pinol had earlier announced that he expects to meet 20 Governors from provinces affected by Ompong to be able to lay out a Master Plan for Rehabilitation of damaged agriculture and fisheries facilities.

Typhoon Ompong has caused more than P26.7 billion worth of damages in the agriculture sector from the Cordillera region and Regions 1, 2, 3, 4-A, 5, and 6.

In Region 3, the estimated cost of damage is more than P2.3 billion and the affected farmers are more than 94,000.

Pinol said he was directed by President Rodrigo Duterte to “immediately prepare the accurate damage report of Typhoon Ompong so that the national government could provide the needed funding for rehabilitation.”

The Agriculture Secretary said the governors’ inputs will be included in a report he intends to submit to Duterte next week.

Politiko would love to hear your views on this...
Post Views: 1
Spread the love
Tags: Department of Agriculture, Governor Susan Yap, president Rodrigo Duterte, Secretary Manny Pinol, Tarlac, Typhoon Ompong
Disclaimer:
The comments posted on this site do not necessarily represent or reflect the views of management and owner of POLITICS.com.ph. We reserve the right to exclude comments that we deem to be inconsistent with our editorial standards.