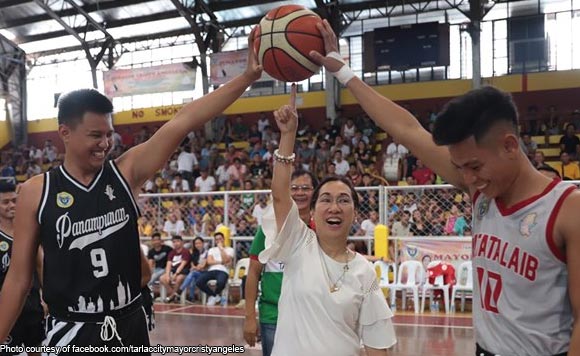 How cute is Tarlac City Mayor Cristy Angeles? In one photo, she was sandwiched between two tall basketball players as she extended her legs, trying to reach what seemed the sky during her municipality’s Angel ng Super Liga Basketball Tournament.

The mayor was more than ecstatic to see different baranggays battling it out for the championship. She congratulated Barangay Matatalaib whose team eventually emerged as the overall winner, a tough undertaking given that everyone performed their best.

Continue the good work, Mayor. We are cheering for you too!

Politiko would love to hear your views on this...
Tags: Angel ng Super Liga Basketball Tournament, Barangay Matatalaib, Mayor Cristy Angeles, Tarlac City
Disclaimer:
The comments posted on this site do not necessarily represent or reflect the views of management and owner of POLITICS.com.ph. We reserve the right to exclude comments that we deem to be inconsistent with our editorial standards.