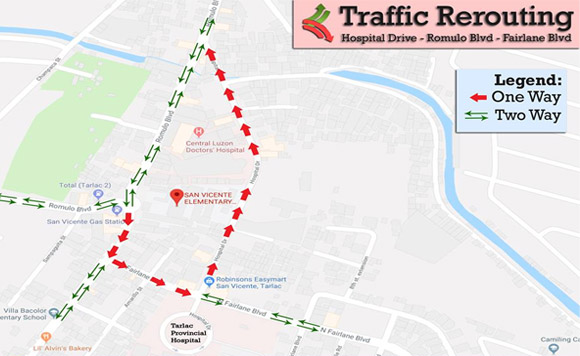 The Department of Public Works and Highways (DPWH) has been undertaking road widening in Tarlac City.

With this, the city government has to undertake traffic rerouting along Hospital Drive-Romulo Blvd-Fairlane Blvd.

The local government said that 15 traffic assistants were also deployed in the area to help motorists and commuters.

The traffic rerouting scheme is a joint effort by the City Transport and Traffic Management Group, Public Order and Safety Office, Brgy. San Vicente, Department of Public Works and Highways and LSD Construction and Supplies.

The road widening project is expected to be completed within 365 days or one year, the city government said, quoting the project’s foreman.

Politiko would love to hear your views on this...
Spread the love
Tags: Brgy. San Vicente, city government, City Transport and Traffic Management Group, Department of Public Works and Highways, Department of Public Works and Highways (DPWH), Public Order and Safety Office, road widening, traffic assistants, traffic rerouting
Disclaimer:
The comments posted on this site do not necessarily represent or reflect the views of management and owner of POLITICS.com.ph. We reserve the right to exclude comments that we deem to be inconsistent with our editorial standards.