Tallest airport tower in PH to rise in Clark – CDC 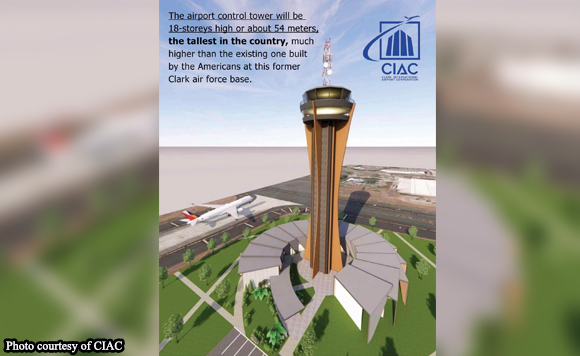 The country’s tallest airport tower will be the first of several infrastructure development projects at the Clark aviation complex, the state-run Clark International Airport Corp. said in a statement on Saturday.

CIAC president Aaron Aquino announced that the 18-storey airport control tower was among several projects in the pipeline that were intended to improve facilities in the aviation complex servicing the Clark International Airport.

Also in the pipeline are the primary and secondary radar and the detailed engineering design of a secondary runway at Clark which will soon be also up for bid, Aquino said.

“As directed (to the technical committee), the detailed engineering and architectural design of the tower must be completed by March 25 so the project will commence construction immediately (and) to be finished by December 2021,” the executive said.

Aquino said the project committee, led by the agency’s vice president Irish Calaguas, was also instructed to fast-track the detailed specifications of the new airfield ground lighting system, another undertaking this year to improve the air traffic control system at Clark.

Politiko would love to hear your views on this...
Post Views: 25
Spread the love
Tags: Clark aviation complex, Clark International Airport Corp., Tallest airport tower
Disclaimer:
The comments posted on this site do not necessarily represent or reflect the views of management and owner of POLITICS.com.ph. We reserve the right to exclude comments that we deem to be inconsistent with our editorial standards.