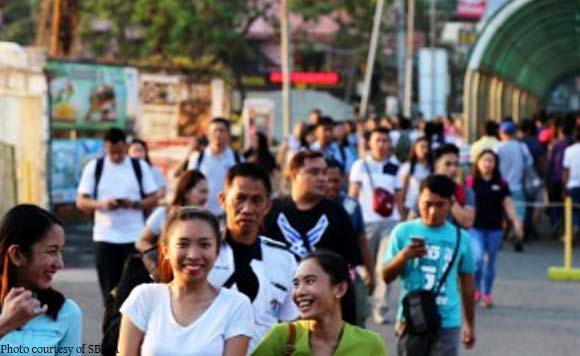 SUBIC BAY FREEPORT — This premier Freeport is fast regaining its number of the workforce which was severely affected by the closure of Korean shipyard Hanjin Heavy Industries Corporation.

Records from the Subic Bay Metropolitan Authority (SBMA) showed that the number of workers inside the Freeport has reached 135,224 in the first half of the year, surpassing the 133,940 record in the same period of 2018.

SBMA chairman and administrator Wilma T. Eisma said she was happy that active workers in this freeport were just a bit lower compared to last year’s yearend record of 135,690.

Eisma expressed optimism that the last year’s employment record would be broken anew following the rise of investments.

Steady growth in investments in the first half of this year has increased the number of workers in this premier Freeport despite the closure in January of Hanjin shipyard, which used to be the single biggest employer here in the past 10 years.

“Steady increase of new investments, as well as expansion projects, we’re also expecting a corresponding steady increase in the number of new jobs,” she added.

Records also manifest the service sector contributes to the biggest number with 92,453 workers or 68.37 percent of the total workforce employed by 2,765 companies as of July this year. In June 2018, the record was 76,652 workers hired by 2,470 companies.

Eisma noted that the rehabilitation of various infrastructure facilities inside the Freeport, including roads, had significantly increased the number of workers hired by construction companies here.

She said the closure of Hanjin, which filed for bankruptcy last January 2019, has caused a 450 percent- drop in the number of workers in shipbuilding and marine-related services.

Another sector that showed a positive gain in the first half is the domestic helpers or caretakers employed at residences in the Freeport which increased to 2,110 (1.57 percent) from a total of 1,664 in the same period last year.

Eisma said the SBMA expects continuing growth in employment generation with the 45 new investments and 21 expansion projects the agency approved in the first six months this year.

The new investment commitments worth more than P5 billion are projected to generate close to 4,000 new jobs, she added. (PNA)

Politiko would love to hear your views on this...
Post Views: 2
Spread the love
Tags: Subic Bay Freeport, Subic Bay Metropolitan Authority (SBMA), Subic employment, Wilma T. Eisma
Disclaimer:
The comments posted on this site do not necessarily represent or reflect the views of management and owner of POLITICS.com.ph. We reserve the right to exclude comments that we deem to be inconsistent with our editorial standards.