The city government of Cabanatuan was tasked to sort out its unliquidated cash advances which have grown to P18.08 million as a result of weak enforcement.

“[T]he observed status of cash advances is also reflective of a weakness in internal control that should have assured management of compliance with laws, rules and regulations,” the Commission on Audit (COA) stated in a report.

An audit of the city government’s finances revealed that prior years’ unliquidated balances comprise 88.7% or P16.04 million of the total sum, with accounts dating as far back as 2001.

In addition, state auditors found that the year-end balances even showed growth, with an additional P1.73 million at the end of 2018.

“The foregoing negative development could be attributed to additional outstanding cash advances which were not timely liquidated,” COA said.

The state auditing agency reminded the city government that that failure to properly settle its accounts is a violation of not only COA Circular 97-002, but also Section 89 of Presidential Decree No. 1445.

“A cash advance shall be reported on and liquidated as soon as the purpose for which it was given has been served,” the law read, as cited in the report. 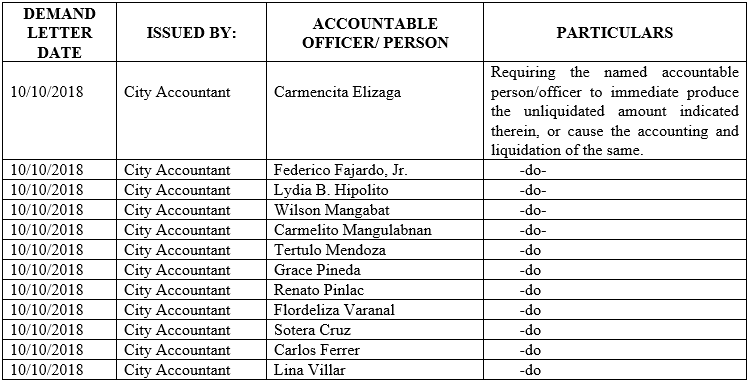 As stated in the report, Cabanatuan’s legal officer has sent official demands to at least eight of the accountable officers, with the threat of legal action if they fail to settle their accounts.

Despite commending the city government’s immediate action, the state auditing agency said that compliance or any settlement are yet to materialize.

Politiko would love to hear your views on this...
Spread the love
Tags: Cabanatuan, city government, Commission on Audit, unliquidated cash advances
Disclaimer:
The comments posted on this site do not necessarily represent or reflect the views of management and owner of POLITICS.com.ph. We reserve the right to exclude comments that we deem to be inconsistent with our editorial standards.