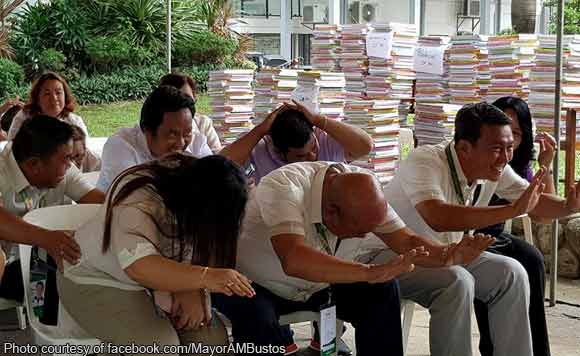 It’s always admirable when a politiko follows protocol the public is encouraged to follow. But just like any human being, even they need improvement sometimes.

Take a look, for example, at Bustos Mayor Arnel Mendoza. He recently held an earthquake drill in his municipality and was even pictured doing the “duck, cover, and hold” move, which aims to protect people from falling debris.

Only Mendoza was still on top of a chair when he did it, which would still expose him to debris should there be a real earthquake.

Politiko would love to hear your views on this...
Spread the love
Tags: Bustos, Mayor Arnel Mendoza, politiko
Disclaimer:
The comments posted on this site do not necessarily represent or reflect the views of management and owner of POLITICS.com.ph. We reserve the right to exclude comments that we deem to be inconsistent with our editorial standards.