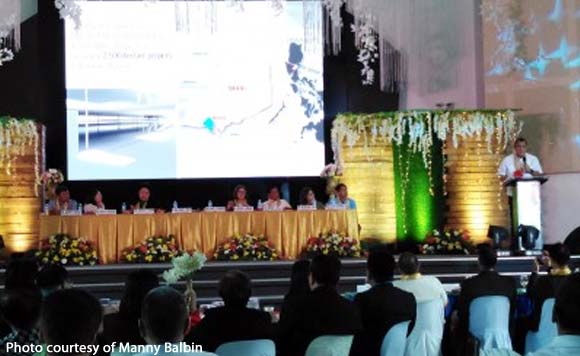 CITY OF MALOLOS, Bulacan– Ten thousand Bulakenyos will benefit from the construction of the P735-billion New Manila International Airport (NMIA) project in this province which is set to start by December this year.

During the Bulacan Investment Forum organized by the Bulacan Chamber of Commerce and Industry (BCCI) held at Hiyas ng Bulacan Convention Center here Wednesday, Raoul Eduardo Romulo, chief finance officer and treasury head of San Miguel Holdings Corporation, said that Bulakenyos will be the priority in the hiring of workers for the construction.

“We will not hire anyone else until there is a qualified Bulakenyo to work for the project,” he said.

Gregoria Simbulan, vice president for Central Luzon of the Philippine Chamber of Commerce and Industry (PCCI), said the chamber will help in the hiring of an initial 10,000 Bulakenyos to work at the airport.

The NMIA’s full operation, which is expected to begin in 2026, is seen to improve the quality of life in Bulacan and nearby provinces.

Romulo said a large number of professionals and skilled workers were needed because other projects such as the construction of the NMIA Airport Expressway and the extension of Skyway Stage 3 would be implemented at the same time as the airport.

Based on the proposed plan, an eight-kilometer elevated NMIA Airport Expressway will be built from the 2,500-hectare airport to the North Luzon Expressway (NLEX) in Marilao area.

The Skyway Stage 3 from NLEX-Balintawak will also be extended to NMIA in Bulacan by crossing the rivers of Tullahan and Muzon.

Express trains will also be built from the NMIA to Quezon City and the extension of the MRT 7 from San Jose Del Monte to Bulakan.

“An express train will transport passengers to and from Bulacan, Quezon City, Manila, Navotas and Malabon,” Romulo said.

The NMIA will be a world-class facility with four parallel runways, upgradeable to six and with a state-of-the-art terminal building.

Romulo said the new airport will be a highly efficient airport with cheaper air travel costs and can host 60 aircraft per hour and per runway. Also, it can accommodate 100 million passengers annually once fully operational.

Based on the signed concession last Sept. 18 between the Department of Transportation (DOTR) and San Miguel Corporation, the San Miguel Aerocity Inc. was granted the task of handling the financing, design, construction, operations and maintenance of the Bulacan international airport. The concession period spans 50 years after the completion of construction of the first phase.

The new airport will be fully funded by private-equity, without government guarantee or subsidy or no cost to the government. (PNA)

Politiko would love to hear your views on this...
Spread the love
Tags: Bulacan Chamber of Commerce and Industry, Bulakenyos, City of Malolos, New Manila International Airport, Ten thousand
Disclaimer:
The comments posted on this site do not necessarily represent or reflect the views of management and owner of POLITICS.com.ph. We reserve the right to exclude comments that we deem to be inconsistent with our editorial standards.