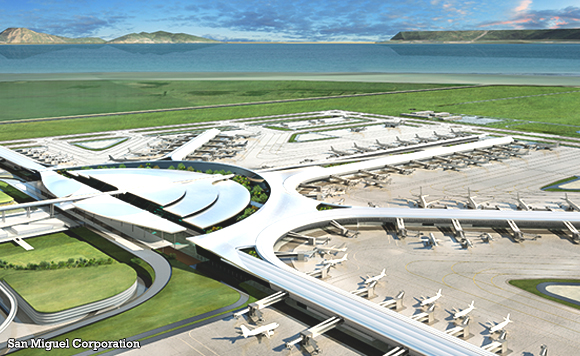 At a public hearing conducted by the Environment Management Bureau of the Department of Environment and Natural Resources (DENR), Fernando said the airport project is seen to create millions of jobs in the town of Bulakan and neighboring areas and help the country recover from the Covid-19 pandemic.

Officials including Meneses as well as other local executives and residents of Barangay Taliptip and Barangay Bambang voiced their support for the P740 billion project during the public hearing.

They said they were formally consulted and have carefully weighed the proposed airport’s benefits for the province and its residents, including measures to mitigate perennial flooding in the province.

Meneses said Bulakan was lucky to be a “strategic location” for a modern airport that could help address congestion in the country’s main gateway, the Ninoy Aquino International Airport.

According to the mayor, Bulakan took into careful consideration the economic development, job opportunities, and new businesses that the airport project could bring.

The town council issued a formal decision to support the project on October 27 last year.

Barangay captains Michael Ramos and Jesus Cruz of Taliptip and Bambang, respectively, pointed out the timeliness of the project, since many of their residents lost their livelihood sources due to the Covid-19 pandemic.

Ramos said SMC showed its commitment and support to his barangay, particularly in relocating residents, even prior to construction.

Politiko would love to hear your views on this...
Post Views: 30
Spread the love
Tags: Bulacan, Bulacan Governor Daniel Fernando, New Manila International Airport, San Miguel Corp
Disclaimer:
The comments posted on this site do not necessarily represent or reflect the views of management and owner of POLITICS.com.ph. We reserve the right to exclude comments that we deem to be inconsistent with our editorial standards.