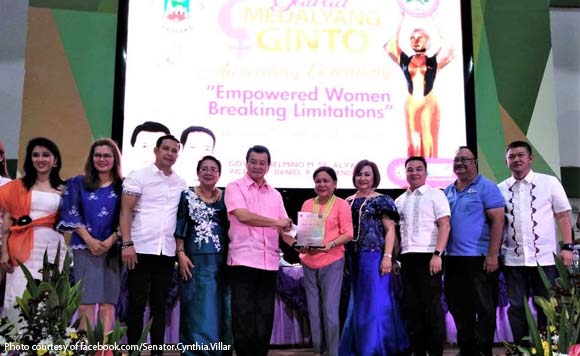 Senator Cynthia Villar, who is seeking reelection this May, graced Bulacan’s awarding ceremony last Monday for outstanding women in the province.

In a speech, the politiko stressed how women these days have already been empowered and the limitless opportunities that await them.

“I believe that women have a lot to contribute to the development given the proper opportunities, and that when we empower women, we empower families and generations of people,” Villar said at the event dubbed, “25th Gawad Medalyang Ginto 2019,” which is part of Bulacan’s celebration of the Women’s Month.

“More and more Filipino women are taking on influential and leadership roles. At bilang mga empowered women, there are no limitations to what we can do or achieve,” she said.

Milagros Imson of Meycauayan City was cited as the Matagumpay na Babaeng Mangangalakal, and Engr. Relynne Miranda of Baliwag as the Huwarang Kabataang Babae sa Pamumuno.