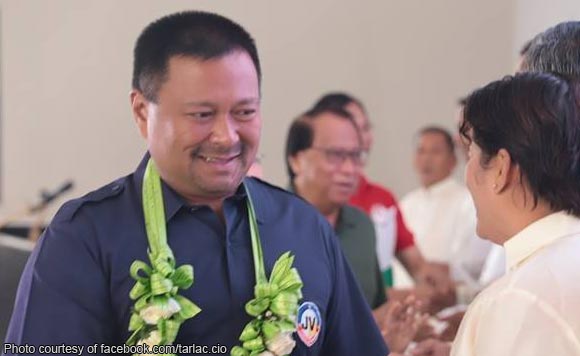 The Tarlac City Information Office said Ejercito, who is seeking a reelection next year, was inspired to commit to allocate funds for various programs of Angeles because of the impressive accomplishments of the lady politiko during the first two years of her current term.

“Senator Ejercito, chairman of the Senate Committee on Urban Planning, Housing and Resettlement, and Senate Committee on Health and Demography, will work hand-in-hand with Tarlac City to pursue policies that will help spur the city’s economy,” it said.

During his visit, Ejercito also administered the oath to the new set of officers of the Samahan ng mga Kagawad (SAMAKA) of Tarlac City.

The city information office said the SAMAKA serves as an avenue to promote interactive resolution of current issues in the barangays through the enactment of ordinances.

Politiko would love to hear your views on this...
Spread the love
Tags: Mayor Cristy Angeles, Senator JV Ejercito, Tarlac City, Tarlac City Information Office
Disclaimer:
The comments posted on this site do not necessarily represent or reflect the views of management and owner of POLITICS.com.ph. We reserve the right to exclude comments that we deem to be inconsistent with our editorial standards.