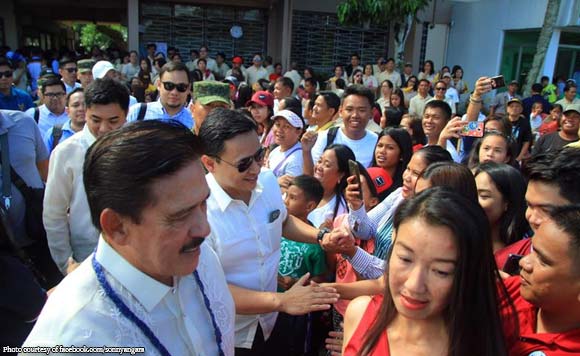 Senator Sonny Angara, who is seeking a reelection in May, attended the celebration Tuesday of the 40th founding anniversary of Aurora, his home province.

Senate President Vicente “Tito” Sotto III was the event’s guest of honor, while Ms. Nini Quezon-Avancena, the last surviving daughter of Dona Aurora Aragon-Quezon, after whom the province was named, was also in attendance.

Other members of the Quezon family were present as well, as the entire province marks also the 131st birth anniversary of Dona Aurora.

According to a statement from Angara’s office, the politiko honored the wife of former President Manuel L. Quezon for her legacy.

Angara said Dona Aurora was the founder of the Philippine Red Cross and an advocate of women’s suffrage. Her “selfless and outstanding service,” he said, “should be emulated by present and future generations.”

Angara last went to Baler town in Aurora during the funeral of his father, Sen. Edgardo Angara, in May last year. The older Angara died from an apparent heart attack.(END)

Politiko would love to hear your views on this...
Spread the love
Tags: Aurora, Dona Aurora, former President Manuel L. Quezon, Ms. Nini Quezon-Avancena, Sen. Edgardo Angara, Senate President Vicente "Tito" Sotto III, Senator Sonny Angara
Disclaimer:
The comments posted on this site do not necessarily represent or reflect the views of management and owner of POLITICS.com.ph. We reserve the right to exclude comments that we deem to be inconsistent with our editorial standards.