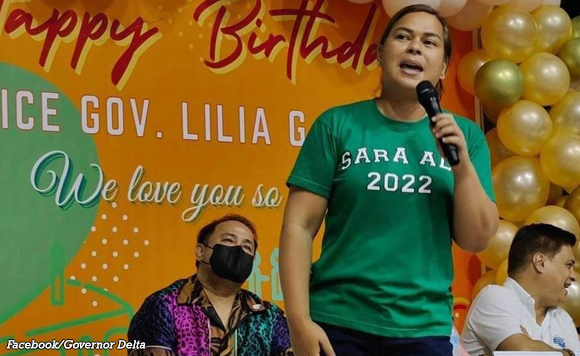 Davao City Mayor Sara Duterte thanked Pampanga residents for their warm welcome in the province and their overwhelming support for her candidacy.

The vice presidential candidate attended Pampanga Vice Governor Lilia Pineda’s birthday celebration on Monday at the Bren Z. Guiao Convention Center, where she was welcomed by hundreds of supporters.

The report said there was no public event or motorcade during their brief stay in Pampanga.

But several groups of supporters were garbed in red or green to express their support to the Marcos-Duterte tandem.

Politiko would love to hear your views on this...
Spread the love
Tags: Mayor Sara Duterte, Pampanga, Vice Governor Lilia Pineda
Disclaimer:
The comments posted on this site do not necessarily represent or reflect the views of management and owner of POLITICS.com.ph. We reserve the right to exclude comments that we deem to be inconsistent with our editorial standards.