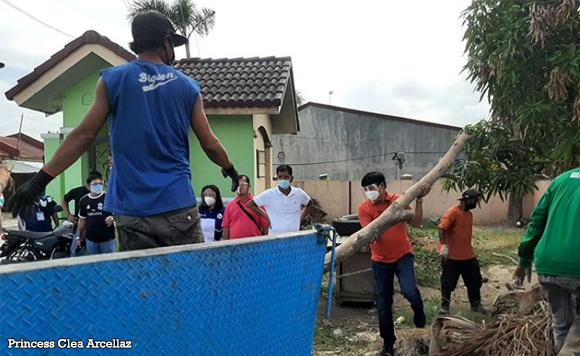 San Simon Mayor Abundio Punsalan Jr. helped the homeowners and volunteers to clean up the area, according to a Sun Star Pampanga report.

“Three hundred families live here in San Simon Villas and for over 15 years, the area has been neglected. Every year, they experience flooding and just recently, some homeowners were hospitalized due to dengue,” he was quoted as saying in the report.

During cleanup, workers unclogged canals and drainages to prevent flooding, and collected cut-off branches of trees.

“We have to do this as early as now in preparation for the rainy and flood season. We also call on residents to maintain the cleanliness of their surroundings as it is the top weapon against any disease, including Covid-19,” Punsalan said in the report.

Politiko would love to hear your views on this...
Post Views: 4
Spread the love
Tags: cleanup drive, San Simon, San Simon Mayor Abundio Punsalan Jr.
Disclaimer:
The comments posted on this site do not necessarily represent or reflect the views of management and owner of POLITICS.com.ph. We reserve the right to exclude comments that we deem to be inconsistent with our editorial standards.