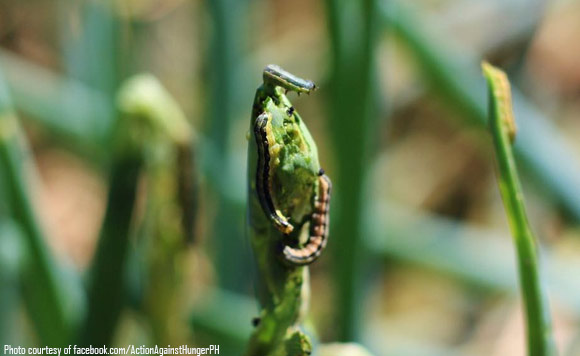 Amor Cabico, LDRRMO head, said Resolution No. 18-004 passed by the council also recommended to the Sangguniang Panlungsod the declaration of state of calamity in the affected villages.

Cabico said the recommendation has been submitted to the city council and was expected to be tackled on Monday.

Violeta Vargas, city agriculture officer, reported that a total of 2,297 farmers tilling a total of 930.26 hectares from the city’s more than 1,100 hectares onion plantation were severely affected by the infestation this season.

Vargas said it was the first time army worms affected onion farmers here.
Aside from this city, army worms also wrought havoc to onions in the towns of Sto. Domingo, Bongabon, Llanera and other places in Nueva Ecija.

Among the onion varieties in the province were yellow gannex, red creole, red shallot and spring onion.

In 2016, the pests destroyed crops in Bongabon and other Nueva Ecija areas. (PNA)

Politiko would love to hear your views on this...
Spread the love
Tags: “harabas, ”, Amor Cabico, Local Disaster Risk Reduction and Management Council (LDRRMC), Nueva Ecija areas, quick response fund (QRF), Sangguniang Panlungsod
Disclaimer:
The comments posted on this site do not necessarily represent or reflect the views of management and owner of POLITICS.com.ph. We reserve the right to exclude comments that we deem to be inconsistent with our editorial standards.