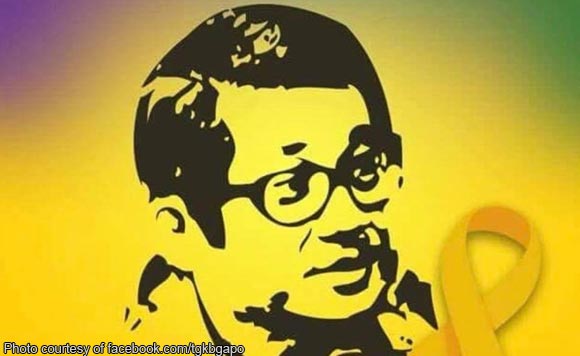 A ceremony unveiling “Ninoy’s” monument and laying of wreath amid a downpour was led by Mayor Edwin Santiago at the city’s Heroes Park, with Sen. Paolo Benigno “Bam” Aquino IV as special guest.

“Mayor EdSa highlighted that Ninoy’s life itself was his greatest contribution to the country for it served as a way to restore freedom and democracy,” the city information office said.

The late Aquino, who led the opposition against the Marcos regime, was assassinated on Aug. 21, 1983 upon his return in Manila after going on exile in the United States.

Ninoy’s death sparked massive demonstrations in the country that led to the People Power Revolution in February 1986. The bloodless revolt ended President Ferdinand Marcos’ control of power, which began in December 1965.

Marcos declared Martial Law all over the starting 1972, curtailing civil liberties that eventually led to violation of human rights.

The commemoration was also attended by other city officials and guests from the private sector.

Politiko would love to hear your views on this...
Tags: City Information Office, former Senator Benigno "Ninoy" Aquino Jr, Pampanga, People Power Revolution, San Fernando
Disclaimer:
The comments posted on this site do not necessarily represent or reflect the views of management and owner of POLITICS.com.ph. We reserve the right to exclude comments that we deem to be inconsistent with our editorial standards.