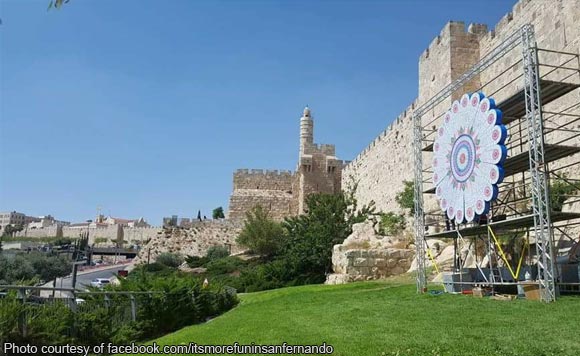 A giant lantern from San Fernando City, Pampanga has been on display in Israel, the City Tourism Office (CTO) said.

The locally-made lantern is the official Philippine representative in the Jerusalem Festival of Lights held starting June 27.

It will be on display until July 5 at the Tower of David, Old Jerusalem, Israel.

The CTO congratulated the lantern team led by Arvin Quiwa who crafted the 16ft traditional San Fernando lantern with rotors.

It urged the Cabalens in Israel to catch the lantern exhibit.

Politiko would love to hear your views on this...
Spread the love
Tags: Arvin Quiwa, City Tourism Office, Israel, Jerusalem Festival of Lights, official Philippine representative, Old Jerusalem, Pampanga, San Fernando City, Tower of David
Disclaimer:
The comments posted on this site do not necessarily represent or reflect the views of management and owner of POLITICS.com.ph. We reserve the right to exclude comments that we deem to be inconsistent with our editorial standards.