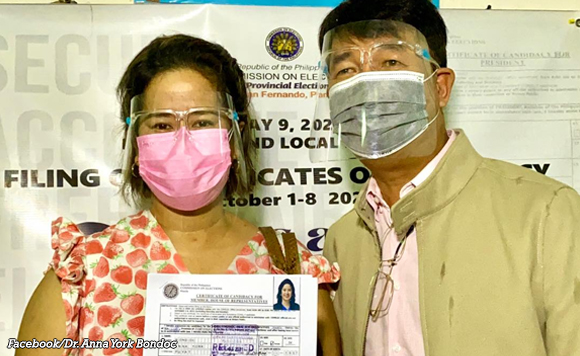 Dr. Anna York Sagum is seeking a return as the congresswoman of the fourth district of Pampanga, according to a Sun Star Pampanga report.

The report said Sagum filed her certificate of candidacy with the Commission on Elections (Comelec) provincial office in San Fernando City.

Pampanga Governor Dennis Pineda personally accompanied Sagum along with officials from the fourth district, according to the report.

She said she is planning to push for the country’s vaccine independence and sufficiency.

Sagum added she would push for “health-related legislation that would benefit the people especially during this pandemic.”

Politiko would love to hear your views on this...
Spread the love
Tags: congresswoman, Dr. Anna York Sagum, Pampanga
Disclaimer:
The comments posted on this site do not necessarily represent or reflect the views of management and owner of POLITICS.com.ph. We reserve the right to exclude comments that we deem to be inconsistent with our editorial standards.