Roman to government officials: Check all cracks in old buildings 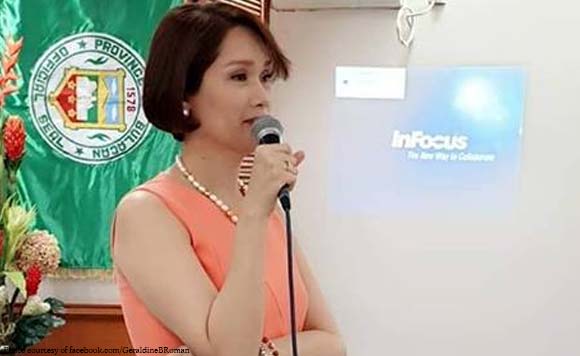 The chairperson of the House committee on disaster management Committee on Wednesday appealed to all government agencies to conduct inspections in all affected areas without any delay.

“There is an immediate need to check in particular old buildings, roads, and other constructions for any cracks, damage or the like so that people will be warned and renovations may be conducted,” Bataan Rep. Geraldine Roman said.

“The experiences of the last two days should serve as a wake-up call to all building contractors to make sure that structures are safe for the public,” she said, referring to the two consecutive earthquakes that struck Luzon and Visayas this week.

She also called on the Philippine Institute of Volcanology and Seismology (PHIVOLCS) to “regularly update the public about its seismic assessments.”

“Fake news on disaster matters will be avoided if people get official bulletins from PHIVOLCS, the National Disaster Risk Reduction & Management Council (NDRRMC), and the local DRRMCs,” she said.

“An educated citizenry is a necessity in case a disaster strikes. Following this, all government offices should conduct earthquake drills and disaster preparedness seminars immediately,” Roman said.

She also sought the speedy passage of House Bill 8165 or the bill creating the Department of Disaster Resilience (DDR).

“This Bill, already approved by the House of Representatives, states, among others, that the DDR shall provide leadership in the continuous development of strategic and systematic approaches to disaster prevention, mitigation, preparedness, response, recovery, and rehabilitation,” she said.

“There is no need to further explain why we need this Department NOW,” Roman said.

Politiko would love to hear your views on this...
Post Views: 0
Spread the love
Tags: Bataan Rep. Geraldine Roman, NDRRMC, PHIVOLCS
Disclaimer:
The comments posted on this site do not necessarily represent or reflect the views of management and owner of POLITICS.com.ph. We reserve the right to exclude comments that we deem to be inconsistent with our editorial standards.