Roman has the sassiest response to LGBT critics 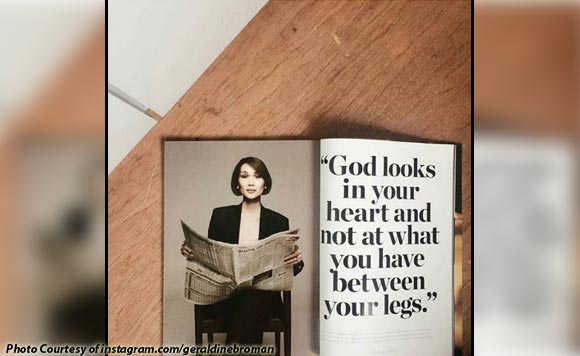 Leave it to Bataan 1st District Representative Geraldine Roman to classily throw a feisty line against critics of the lesbian, gay, bisexual, and transgender (LGBT) community.

The politiko was recently featured in a fashiom magazine, where Roman was pictured in a black ensemble while holding a newspaper.

Across the page, Roman was quoted as saying, “God looks at your heart and not at what you have between your legs.”

[From #TeamG] Have a safe and happy weekend, Equality Babies! Here's a little #WeekendInspo from your Equality Mom. ❤ (Photo: carissamari_)

Politiko would love to hear your views on this...
Spread the love
Tags: Bataan 1st District Representative, Geraldine Roman, LGBT critics
Disclaimer:
The comments posted on this site do not necessarily represent or reflect the views of management and owner of POLITICS.com.ph. We reserve the right to exclude comments that we deem to be inconsistent with our editorial standards.