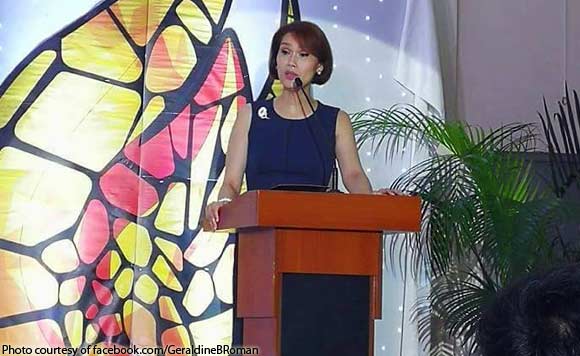 As President Rodrigo Duterte recently announced that the city of Marawi was finally liberated from terrorists, Bataan District 1 Geraldine Roman acknowledged the victory in Marawi “for the entire Filipino people.”

In a statement on her Facebook page, the representative said the liberation of Marawi from Maute terrorist elements is “not only for the army or the administration.”

“We pay tribute to all our Armed Forces personnel who sacrificed their lives in order to restore peace and order in Marawi. They are our heroes and their sacrifices were not put to naught. We will make sure that they will never be forgotten,” Roman said.

The politiko also praised the President for being “a true leader in times of crisis.”
“I also congratulate President Duterte for his decisiveness and firm hand in finally putting a stop to the war that has ravaged Marawi,” she said.
The congresswoman vowed to work with other representatives for the rehabilitation of Marawi. She called on the business sector to help “uplift the lives of the people of Marawi and the entire island of Mindanao.”

Politiko would love to hear your views on this...
Post Views: 0
Spread the love
Tags: Bataan District 1 Geraldine Roman, Marawi, Mindanao, president Rodrigo Duterte
Disclaimer:
The comments posted on this site do not necessarily represent or reflect the views of management and owner of POLITICS.com.ph. We reserve the right to exclude comments that we deem to be inconsistent with our editorial standards.