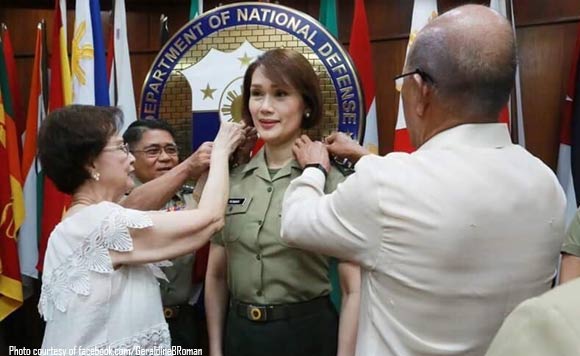 Bataan first-district Rep. Geraldine Roman has taken her oath as a reservist of the Armed Forces of the Philippines, making her the country’s first transgender military officer.

Roman was given the rank of Lieutenant Colonel as she officially joined the Philippine Army Reserve Force.

“Yesterday, I proudly took an oath to be a Reservist Officer of the Armed Forces of the Philippines, making me the first transgender military officer of our country,” she said in a statement.

Defense Secretary Delfin Lorenzana administered the donning of ranks and oath-taking ceremony that was also attended by General Rey Leonardo Guerrero, AFP Chief of Staff, and other defense and security officials.

“I commend the AFP for allowing Filipino LGBT members to serve their country in uniform. My belief is that ALL patriotic Filipinos must be allowed to apply for military service, regardless of gender and sexual orientation and identification,” Roman said.

“After all, war and disaster do not recognize gender. These affects everybody, and EVERYONE must defend and serve our communities and our country,” she added.

Roman also pushed for the return of the mandatory Reserve Officers Training Corps or ROTC program for grades 11 and 12.

“We in Congress are working to make the ROTC experience a significant, beneficial and meaningful training experience. We will ensure that Patriotism will be inculcated among the youth through this course,” she said.

“This is in consonance with Article II section 13 of the Constitution which explicitly provides that ‘the State shall inculcate in the youth patriotism and nationalism, and encourage their involvement in public and civic affairs’,” Roman said.

Politiko would love to hear your views on this...
Spread the love
Tags: AFP Chief of Staff, Armed Forces of the Philippines, Article II section 13 of the Constitution, Bataan first-district Rep. Geraldine Roman, Defense Secretary Delfin Lorenzana, General Rey Leonardo Guerrero, ilipino LGBT, Lieutenant Colonel, Philippine Army Reserve Force, Reserve Officers Training Corps or ROTC program, Reservist Officer of the Armed Forces of the Philippines
Disclaimer:
The comments posted on this site do not necessarily represent or reflect the views of management and owner of POLITICS.com.ph. We reserve the right to exclude comments that we deem to be inconsistent with our editorial standards.