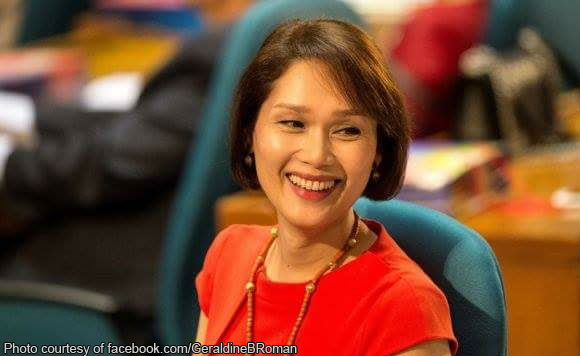 Bataan 1st District Geraldine Roman has formalized her desire for Congress to investigate the alleged discrimination against a group of transgenders led by TV personality Jervi Li, who is known as an impersonator of broadcaster Karen Davila, over the weekend in Makati City.

Roman, who is also a transgender, shared on her Facebook account a copy of House Resolution No. 2094 that she filed Tuesday, “directing the House Committee on Women and Gender Equality to conduct an inquiry, in aid of legislation, on the possible discriminatory incident” involving Li’s group.

Li and her friends complained of being denied entry at a Makati City bar last Aug. 25 because of their sexual orientation. A bouncer of the bar told them “gays” were not allowed at the time.

The bar manager explained later that the ban was supposedly only meant for a group of transgenders who were accused of stealing something inside.

In her resolution, Roman said “the malicious refusal of the establishment for Jervi Li and company to enter the premises on the ground of being ‘Bakla’ is an affront to all the members of the LGBT Community who are already suffering from discrimination by society.”

She said that “while businesses are given the prerogative to manage their own affair and implement their own set of policies, said policies should not and could not contravene the Constitution, the supreme law of the land.”

Roman cites provisions of the Philippine Constitution, as well as of international laws, that guarantee full respect for human rights and dignity, and shun any form of discrimination.

Citing past incidents in the country of the same nature, Roman lamented about “the systematic discrimination that transgender Filipinos face, which embrace not only in getting access to public accommodations such as restaurants and bars, but also to education, employment and social services.”

“These incidents underscore the need to have meaningful laws in place which address the general public’s lack of knowledge regarding our LGBT brothers and sisters,” she said.

Roman is among the authors of the SOGIE (Sexual Orientation and Gender Identity and Expression) Equality Bill in the House of Representatives.

Politiko would love to hear your views on this...
Spread the love
Tags: 1st District, Bataan, Congress, Geraldine Roman, House Committee on Women and Gender Equality, Jervi Li, Karen Davila, LGBT community, Makati bar, Makati City
Disclaimer:
The comments posted on this site do not necessarily represent or reflect the views of management and owner of POLITICS.com.ph. We reserve the right to exclude comments that we deem to be inconsistent with our editorial standards.