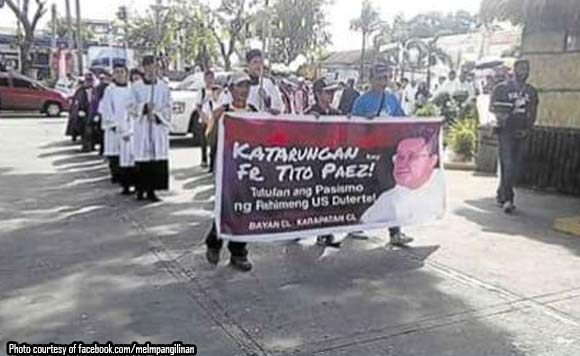 Various religious and rights groups call on the Duterte administration to probe on the recent killing of Catholic priest Fr. Marcelito “Tito” Paez in Nueva Ecija.

The Redemptorist Vice-Province of Manila and Province of Cebu said in a statement that the killings under the current administration have “exposed its authoritarian nature” in the context of continuous violation of the rule of law and a looming revolutionary government.

“It has continued to promote a culture of impunity. It has initiated a systematic crackdown on leaders of people’s organizations and cause-oriented groups. The murder of Fr. Marcelito ‘Tito’ Paez and other suspected of taking a militant stance supportive of the people’s resistance shows that extra-judicial killings now target not only drug users but anybody who is promoting human rights and defending the poor,” the statement read.

The Kapatirang Simbahan Para sa Bayan, meanwhile, said it is “not surprising” if church people today who oppose Duterte’s Martial Law would “blend with the struggle and hope of the people” like how Fr. Paez dedicated his life to serve the vulnerable.

“It is not only rational to do so, but moral and ethical. Likewise, it must not shock us, when they fulfill the work of shepherding the flock, would stand with the masses in favor of democracy, human rights, and peace based on justice,” the group said.

Politiko would love to hear your views on this...
Post Views: 0
Spread the love
Tags: Catholic priest Fr. Marcelito “Tito” Paez, Duterte administration, Kapatirang Simbahan Para sa Bayan, Nueva Ecija, Redemptorist Vice-Province of Manila and Province of Cebu, revolutionary government
Disclaimer:
The comments posted on this site do not necessarily represent or reflect the views of management and owner of POLITICS.com.ph. We reserve the right to exclude comments that we deem to be inconsistent with our editorial standards.