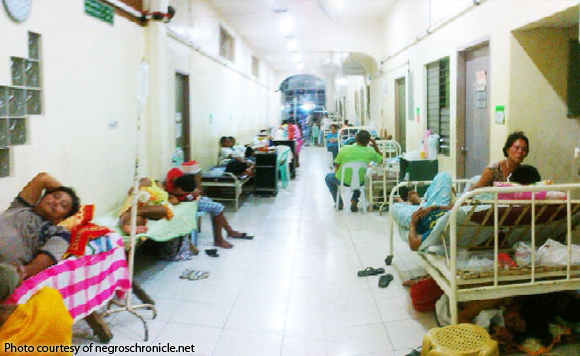 Pampanga 2nd District Rep. Gloria Macapagal-Arroyo wants to rationalize and modernize the country’s health delivery system after noting the deterioration of government hospitals despite the devolution of health service.

The lady politiko said this will be possible through House Bill No. 4143.

She added there is a pressing need to rationalize and modernize the health care delivery system in order for the government to fully and effectively perform its constitutional mandate to protect and promote the people’s right to health and instill health consciousness among them.

“The problems brought about by devolution led to the deterioration of health services particularly in far-flung areas where services are needed most. Only 1/3 of the total number of hospitals and about ½ of hospital beds are public. Out of the country’s 41,000 barangays, only ¼ have a barangay health station. These government health facilities have been notoriously described as ‘death stations’ for their lack of equipment, medicines and able staff,” the lady politiko said.

To address the situation, she asserted that there should be a program of extending technological, financial and administrative assistance to LGUs to support and improve the provision, operation and maintenance of their health facilities and equipment through inter-agency and multi-sectoral cooperation.

Arroyo said the Department of Health should provide each LGU competent physicians to assist the local chief executive as may be appropriate in the monitoring of health care delivery functions and enhance the capability of hospitals.

Not only should more doctors to the barrio be deployed, the Pampanga solon said a residency training and accreditation of private specialist practitioners should be implemented in provincial hospitals and medical centers.

To attract more doctors in remote areas, Arroyo said they should be given more incentives and benefits in the form of hazard allowance, subsistence pay, automatic promotion, scholarships to their legitimate children in state colleges and universities as well as free legal representation and consultation in cases of coercion, interference and other cases filed by or against such doctors in the performance of their duties.

A stronger partnership should likewise be created between the DOH and LGUs in order to establish health care delivery facilities as well as a dependable two-way referral system in higher level health care stations reaching up to the specialty hospitals and vice versa.

Arroyo’s bill also pushes for the establishment of diagnostic centers with modern and quality equipment in all provincial hospitals.

The Vice Chairman of the health board will be the Chief of the District Hospitals, Medical Centers and Specialty Hospitals. The members will be composed of the Representative of the Congressional District for hospitals in his political district; Senator of the Republic for all medical centers and specialty hospitals; a mayor of the catchments area of the district; and representatives of the Philippine Hospital Association, Philippine Medical Association; non-government organizations involved in health services; religious sector, and the private sector.

Arroyo said a P1 billion annual funding support will be needed in order to implement the provisions in her bill.

“Notwithstanding the devolution of health services in 1993, the deterioration of health facilities and equipment remains deplorable, something which has been admitted by the department. As early as 1995, the DOH reported in its Hospital Devolution Study that LGU funds to finance operations of devolved health services were inadequate. This bill humbly attempts to respond to such an urgent need to effectively address pressing health issues in order to rationalize the health care delivery system in our country,” she stressed.

Politiko would love to hear your views on this...
Spread the love
Tags: DOH, local government units, Metro Manila, Pampanga 2nd District Rep. Gloria Macapagal-Arroyo
Disclaimer:
The comments posted on this site do not necessarily represent or reflect the views of management and owner of POLITICS.com.ph. We reserve the right to exclude comments that we deem to be inconsistent with our editorial standards.