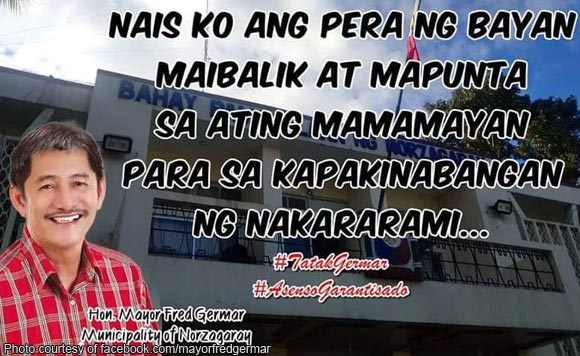 Norzagaray Mayor Alfredo Germar on Monday appealed for the support of his staff and department heads as he is set to meet various offices in the town hall for the first time since he returned to office two months ago.

Germar’s dismissal from service was earlier ordered by the Ombudsman over a graft case for hiring six consultants without the municipal approval in 2016.

But he reclaimed his post after the Supreme Court in October nullified his removal and perpetual ban from office.

Politiko would love to hear your views on this...
Tags: Mayor Alfredo Germar, Norzagaray, Supreme Court
Disclaimer:
The comments posted on this site do not necessarily represent or reflect the views of management and owner of POLITICS.com.ph. We reserve the right to exclude comments that we deem to be inconsistent with our editorial standards.