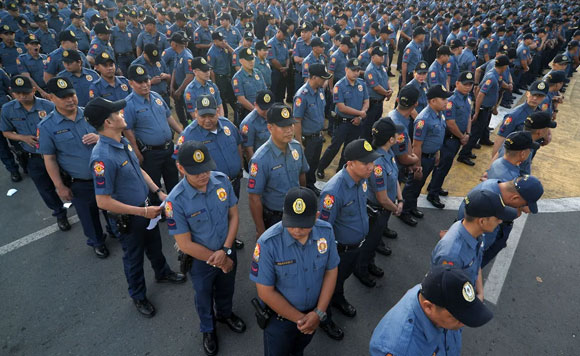 Police Regional Office 3 (PRO3) will deploy some 410 personnel to assist in maintaining peace and order at the vicinity of the House of Representatives in Quezon City during President Rodrigo Duterte’s third State of the Nation Address (SONA) on July 23.

Aside from the augmentation forces, he said two platoons and one Quick Reaction Team were also organized on standby.

He said they would be deployed on orders as the need arises.

“Our personnel are reminded to observe ‘maximum tolerance’ and to ensure they respect the human rights of protesters as they are again expected to hold rallies when the President delivers his 3rd SONA,” Corpus said.

“I have also ordered for the intensified conduct of checkpoint operations particularly along major thoroughfares to ensure the maintenance of peace and order during said event,” he added.

Politiko would love to hear your views on this...
Spread the love
Tags: Batasan for Duterte’s SONA, Police Regional Office 3, president Rodrigo Duterte, Quezon City, SONA, State of the Nation Address
Disclaimer:
The comments posted on this site do not necessarily represent or reflect the views of management and owner of POLITICS.com.ph. We reserve the right to exclude comments that we deem to be inconsistent with our editorial standards.