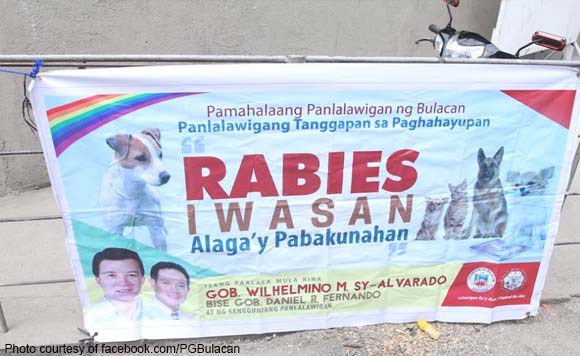 At least six people died this year in Bulacan due to rabies, the provincial government said Monday.

This as the local government vowed to continue with its free anti-rabies vaccination to dogs and cats.

Dr. Voltaire Basinang, provincial veterinarian, said that the number of fatalities for the past months already surpassed the five recorded deaths in 2017.

Bulacan now ranked 9th from previous 7th place among the provinces with highest records of animal bite cases, he said.

He added that 25 dogs were positively diagnosed with rabies in 2017 and eight dogs during the first quarter of this year.

He urged owners in several villages in Pandi and Balagtas to have their dogs and cats vaccinated for free on April 17-20.

However, if a barangay wishes for free vaccinations to be conducted in their area, a request letter addressed to Governor Wilhlemino M. Sy-Alvarado is the only requirement, he added.

Alvarado issued a letter last February that mandated every municipality to hire a municipal veterinarian and acquire dog pounds that can be home to stray, lost, abandoned or surrendered animals. #

Politiko would love to hear your views on this...
Tags: Balagtas, Bulacan, Dr. Voltaire Basinang, Governor Wilhlemino M. Sy-Alvarado, Pandi
Disclaimer:
The comments posted on this site do not necessarily represent or reflect the views of management and owner of POLITICS.com.ph. We reserve the right to exclude comments that we deem to be inconsistent with our editorial standards.