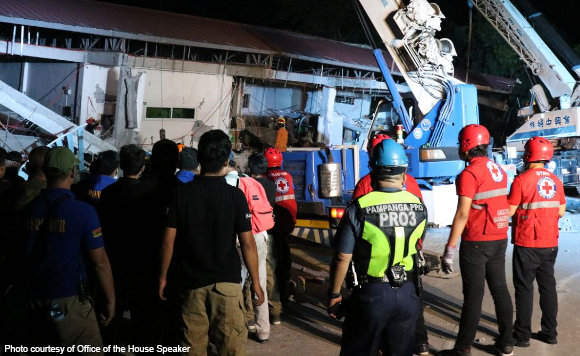 A state of calamity was declared in Pampanga province today.

Placing Pampanga under a state of calamity will enable the province and the people to immediately rebuild after Monday’s 6.1-magnitude earthquake, said Vice Governor Dennis Pineda.

The Department of Health said a total of 16 people dead, 112 injured, and 15 missing were reported in Region 3.

Pineda said the quake damaged not less than 10 churches and caused cracks on the lahar-catchment FVR Megadike.

Damages to public and private infrastructure are still being assessed, he added.

Pineda, also the vice chair of the Pampanga Disaster Risk Reduction and Management Office, said he also directed the mayors of Apalit, Sto. Tomas and Guagua to order the temporary closure of Chuzon Supermarket branches in those town to give way to structural assessments, with people’s safety being the priority.

The four-storey Chuzon Supermarket building in Porac collapsed shortly after the tremor.

Pineda, who supervised rescue operations at the site until 5 a.m. today, shared rescuers have retrieved in Chuzon the bodies of four dead workers and eight injured workers as of Tuesday morning.

“We cannot account for all the more than 90 Chuzon workers. We have no information if they managed to run to safety or if they were trapped in the rubbles. We advised the management to make the survivors or their relatives report their situation until a full accounting of people is done,” the politiko said.

The vice governor, meanwhile, expressed his gratitude to several companies and persons for helping respond to the disaster by lending equipment like cranes and giving food supplies.

Pampanga town declares state of calamity due to quake

Politiko would love to hear your views on this...
Spread the love
Tags: Pampanga province, Vice Governor Dennis Pineda
Disclaimer:
The comments posted on this site do not necessarily represent or reflect the views of management and owner of POLITICS.com.ph. We reserve the right to exclude comments that we deem to be inconsistent with our editorial standards.