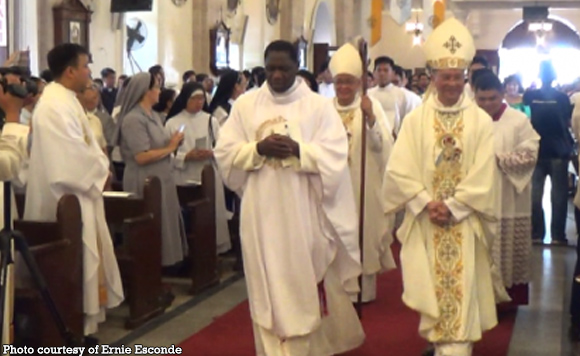 ORANI, Bataan — Pope Francis on Thursday conferred the revered title “Minor Basilica” to the Church of Orani here that is more popularly known as the Miraculous Virgin of the Most Holy Rosary Church.

Bishops from Central Luzon and priests from the Balanga Diocese assisted Bataan Bishop Ruperto Santos in a Holy Mass following the solemn declaration read in Latin by Father Perry Medina.

Santos led in the removal of the white cloth covering the Papal chair in the altar, signifying it was ready for use by the Pope.

“We must lead to Mary, love her and live like her,” Santos urged the faithful in his homily.

Mary refers to the Miraculous Virgin Mary of the Most Holy Rosary, the patron Saint of Orani.

An image of the Virgin Mary on the beautiful altar of the 309-year old church is believed to be 303 years old.

He said that basilica symbols like the Papal chair, umbrella, bell, Vatican logo, among others, can be seen in the altar.

The parish priest said Orani Church has become the 16th Minor Basilica in the Philippines.

“Kaya napakalaking biyaya sa mga taga-Orani, sa buong diocese ng Balanga, sa Bataan na tayo’y pinagkalooban ng Santo Papa. Hindi natatapos sa titulo ng pagiging Minor Basilica, kailangang ipakita nating buhay ang simbahan (Thus, it is a big blessing for the Orani people, in the whole Diocese of Balanga, in Bataan, that the Pope has provided us. It does not end with the title of being a Minor Basilica, we need to show that the church is alive),” Pantig said.

Rep. Geraldine Roman of Bataan’s first district, dressed in a beautiful terno, was among the huge crowd of people inside the church, who attended the Mass and witnessed the conferment of the Minor Basilica title.