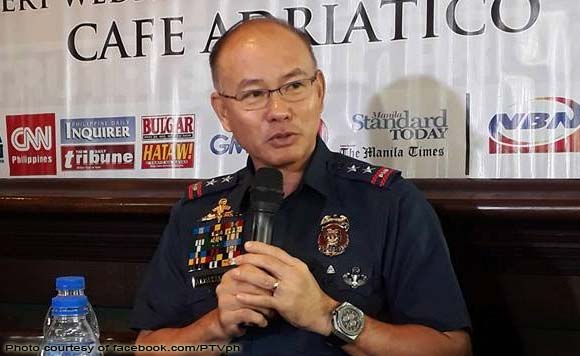 Philippine National Police (PNP) chief Director General Oscar Albayalde on Thursday paid his last respects to a police officer killed in an ambush Tuesday by the communist rebels in this province.

Albayalde posthumously awarded the “Medalya ng Kadakilaan” (Medal of Valor) to Police Officer 2 Marshal Ronald Ruidera, which was received by his wife Layra, at his wake in Barangay 4, San Luis town.

Rudiera was a member of the 1st Aurora Provincial Mobile Force Company, who, along with other police personnel were dispatched to investigate the reported arson incident that transpired Tuesday at Sitio Dimabuyo in Barangay Villa Aurora, Maria Aurora town.

They were in convoy when fired upon by undetermined number of armed men believed to be members of Kilusang Larangang Guerrilla Sierra Madre.

Meanwhile, the PNP chief also visited the wounded Senior Police Officer 2 Angelo Gawat, who is also part of the team that was ambushed by the rebels. Gawat, chief investigator of the Maria Aurora Police Station, is still confined at the Premier General Hospital in Barangay Suklayin, this town.

The PNP Chief said he has directed the police to beef up the checkpoints in the province and asked them to seek help from the Philippine Army to ensure the safety of the people of Aurora.

“This is to preempt any ‘hostile actions’ from the New People’s Army (NPA) and to ensure the safety of the people,” he said, noting that he instructed the police to intensify security measures in all PNP facilities and installations.

“The PNP and the Philippine Army are continuously conducting their operations along the Sierra Madre mountains in this province to remove the presence of the communist rebels,” he added.

He also appealed to the public to give timely information so that it can be immediately acted upon.

“Let us be united to maintain the peace and order in this province. Give us timely information about the movements of the NPAs or even the private armed groups or any criminalities and I am sure the police will respond to your information,” Albayalde said.

He added that the police will continue to fight all forms of criminalities and more operations will be launched to secure the people.

“Since election is coming, security procedures and standard operational procedures are being strictly observed,” he said. (PNA)

Politiko would love to hear your views on this...
Spread the love
Tags: Aurora Provincial Mobile Force Company, chief Director General Oscar Albayalde, Marshal Ronald Ruidera, Medalya ng Kadakilaan, Philippine National Police, Sitio Dimabuyo, Supt. Cosme Abrenica
Disclaimer:
The comments posted on this site do not necessarily represent or reflect the views of management and owner of POLITICS.com.ph. We reserve the right to exclude comments that we deem to be inconsistent with our editorial standards.